Lagarde, who lives in Stillwater, was studying to be a chef in the early 1980s when he took a class in ice carving at North Hennepin Technical College in Minneapolis, the Pioneer Press reported.

"The first day, they set us down with a block of Ivory soap," Lagarde said. "The second day, we got a 400-pound block of ice. I ended up making a swan."

Lagarde, 68, started carving wooden models to show restaurant owners what he could create out of ice. "I wanted to get little statues of the ice carvings that I did, so if I went around and talked to people, I'd have something to show them — something that wouldn't melt." 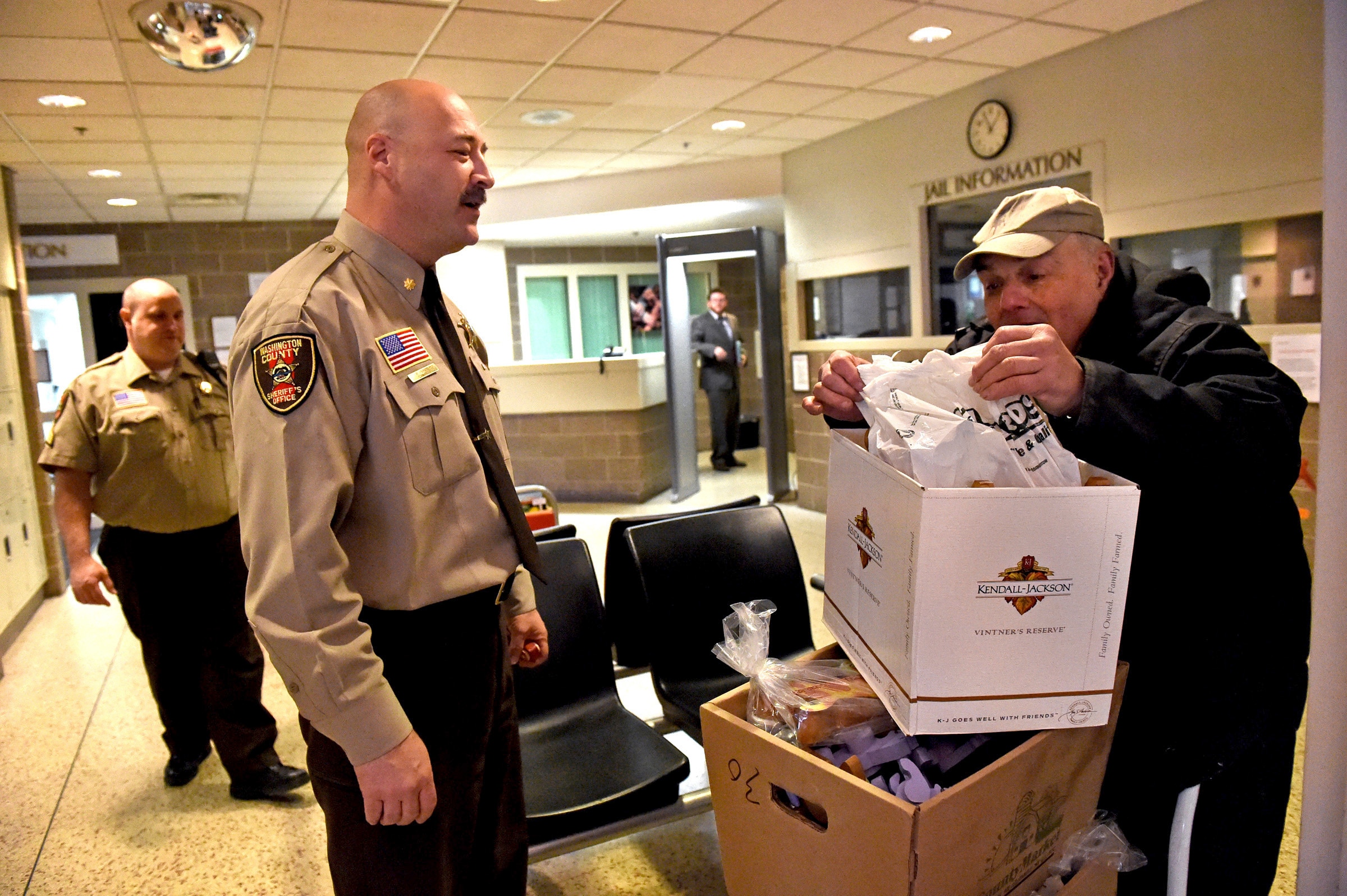 In this Dec. 7, 2016 photo, Phil Lagarde, right, chats with jail commander Roger Heinen as he brings boxes of wooden toys to the Washington County Law Enforcement Center in Stillwater, Minn. Heinen said Lagarde's toys will help alleviate the stress and anxiety that come with jail-time visits during the holidays; between 6 and 16 children visit the jail each week.
Photo Credit: Jean Pieri/Pioneer Press via AP
Thirty-five years later, Lagarde spends six to seven hours a day in his basement workshop making wooden toys. He donates the toys — 1,500 thus far this year — to police officers and firefighters, who hand them out to children who have been affected by traumatic events.

"Trucks, cars, dinosaurs, knights, saber-toothed tigers, dragons, you name it," said Lagarde. "I went to the fire station yesterday and dropped 30 toys and three fire trucks, and then I dropped 90 toys at the police station. They can carry them around in their squad cars, and if they come across a kid in a stressful situation, they can hand them one and, hopefully, it will help distract them."

Lagarde recently added another beneficiary to his donation list: the Washington County Jail in Stillwater.

After reading an article about efforts to make the jail's lobby more child-friendly, Lagarde decided to donate five boxes of toys to the jail. Jail staff will give some of the toys to children of incarcerated parents during the next few weeks and keep some for children to play with as they wait.

On a recent weekday morning, Lagarde pulled into the jail's parking lot, unloaded the boxes from the back of his black Mazda 5 and used a pushcart to transport 122 toys to the jail's lobby.

Jail commander Roger Heinen and Sgt. Dave Stumpner greeted him at the door.

"Oh, wow, this is awesome," Heinen said. "The kids will love these. Thank you." 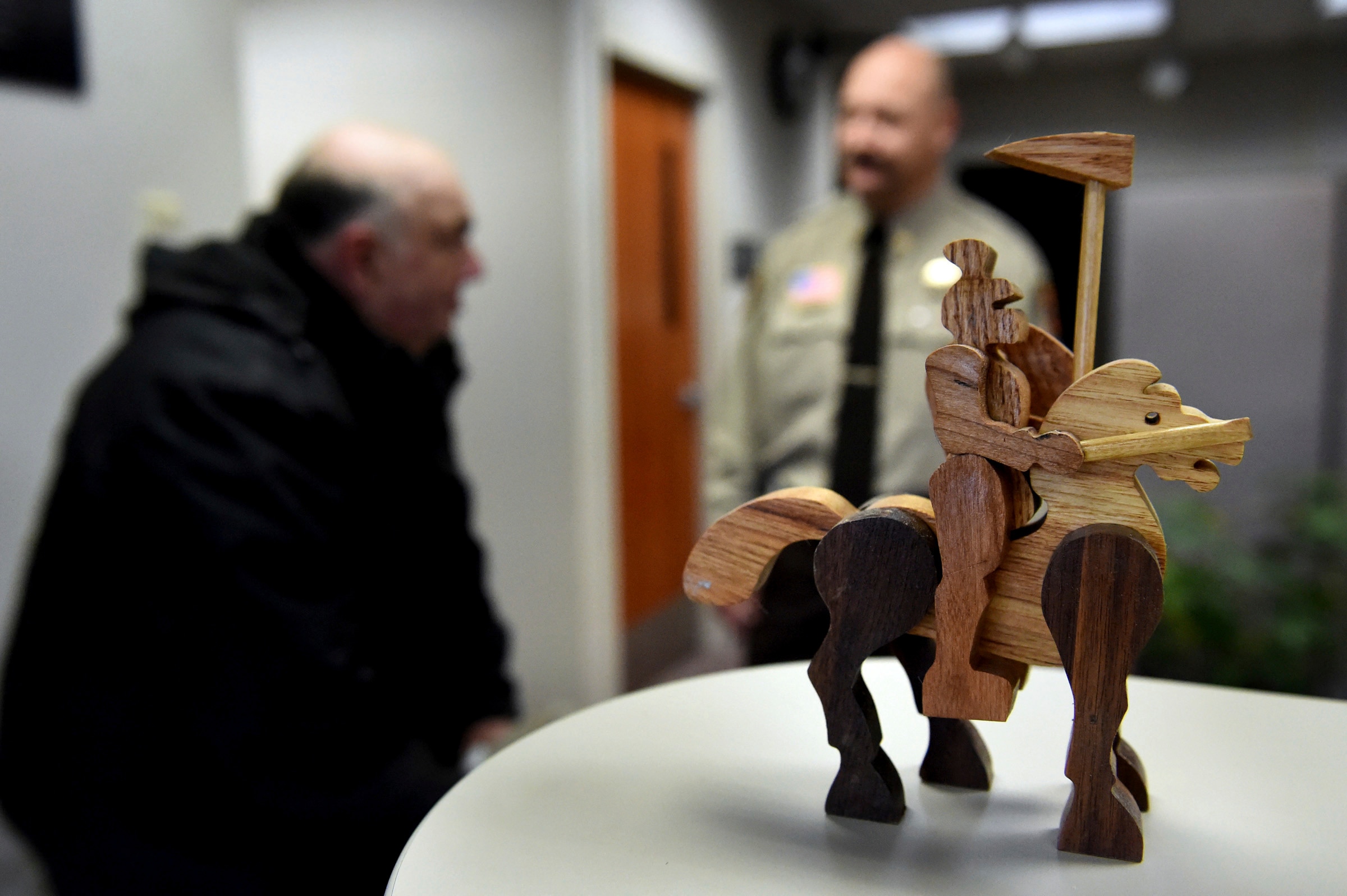 In this Dec. 7, 2016 photo, Phil Lagarde talks to Washington County Jail Commander Roger Heinen after delivering handmade wooden toys to the jail in Stillwater, Minn. Lagarde used 14 pieces of wood, including black walnut, cherry, hard maple and oak, to make this 10-inch-tall knight and horse.
Photo Credit: Jean Pieri/Pioneer Press via AP
Lagarde pulled out one of his most special toys — a knight on horseback carrying a shield and flag — to show the men.

He joked that he was getting a reputation in Washington County as a "toy monger" and told the men to contact him when they needed more toys.

Heinen said Lagarde's toys will help alleviate the stress and anxiety that come with jail-time visits during the holidays; between 6 and 16 children visit the jail each week.

"It's wonderful to have something to hand out," Heinen said. "It's kind of hard for these kids to understand why Mom or Dad can't be with them at Christmas, and coming to jail is scary for a child, so it's nice to give them something to brighten their day as they walk out the door."

Lagarde works through an organization called TLC Toys, based in Andover. TLC Toys receives donations of wood for volunteers to make toys; last year the organization gave away 31,286 toys. 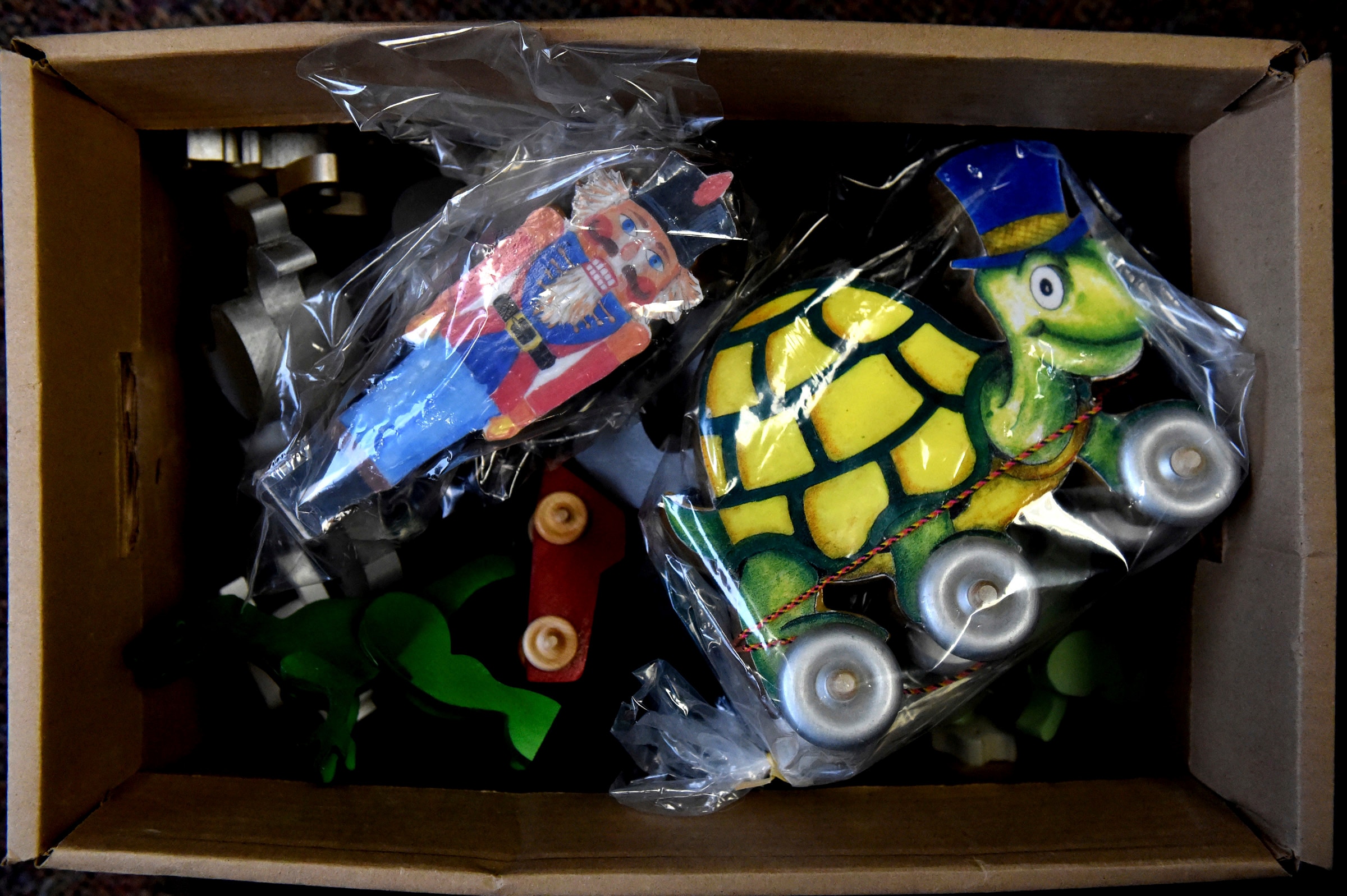 In this Dec. 7, 2016 photo, handmade toys by Phil Lagarde, 68, are packed in a box in Stillwater, Minn. Lagarde spends hours each day building wooden toys that he is donating this holiday season to the Washington County Jail.
Photo Credit: Jean Pieri/Pioneer Press via AP
"The good news is that all the wood for TLC is donated, but the bad news is that we don't get a choice as to the kind of wood we get," Lagarde said.

Lagarde used 14 pieces of wood, including black walnut, cherry, hard maple and oak, to make a 10-inch-tall knight and horse. A small velociraptor had a body made out of oak, legs made out of cherry and arms made out of maple.

Lagarde uses a scroll saw to create his toys. He pastes a pattern onto the wood and cuts along the line. "It takes patience and hand-eye coordination," he said. "You just follow the lines, so like anything else, it's practice, practice, practice."

"To do it at the level that he does, that takes a lot of talent," Hartman said. "He's extremely good. Extremely."

During a recent tour of his workshop at his South Sixth Street house, Lagarde showed off some of the 40 different toys that he creates. Each toy takes about an hour to make. He paints most of them, but some are dipped in a homemade mix of boiling linseed oil, mineral spirits and polyurethane.

Lagarde wears safety glasses and listens to classical music piped through his headphones while working. He said it's not unusual for him to work four to five hours at a time. He's cut himself three times — "it's not bad, you just cut your fingertip" — and fallen asleep twice. He has since installed a "dead man's switch," so if his foot comes off the switch, the saw stops, he said. 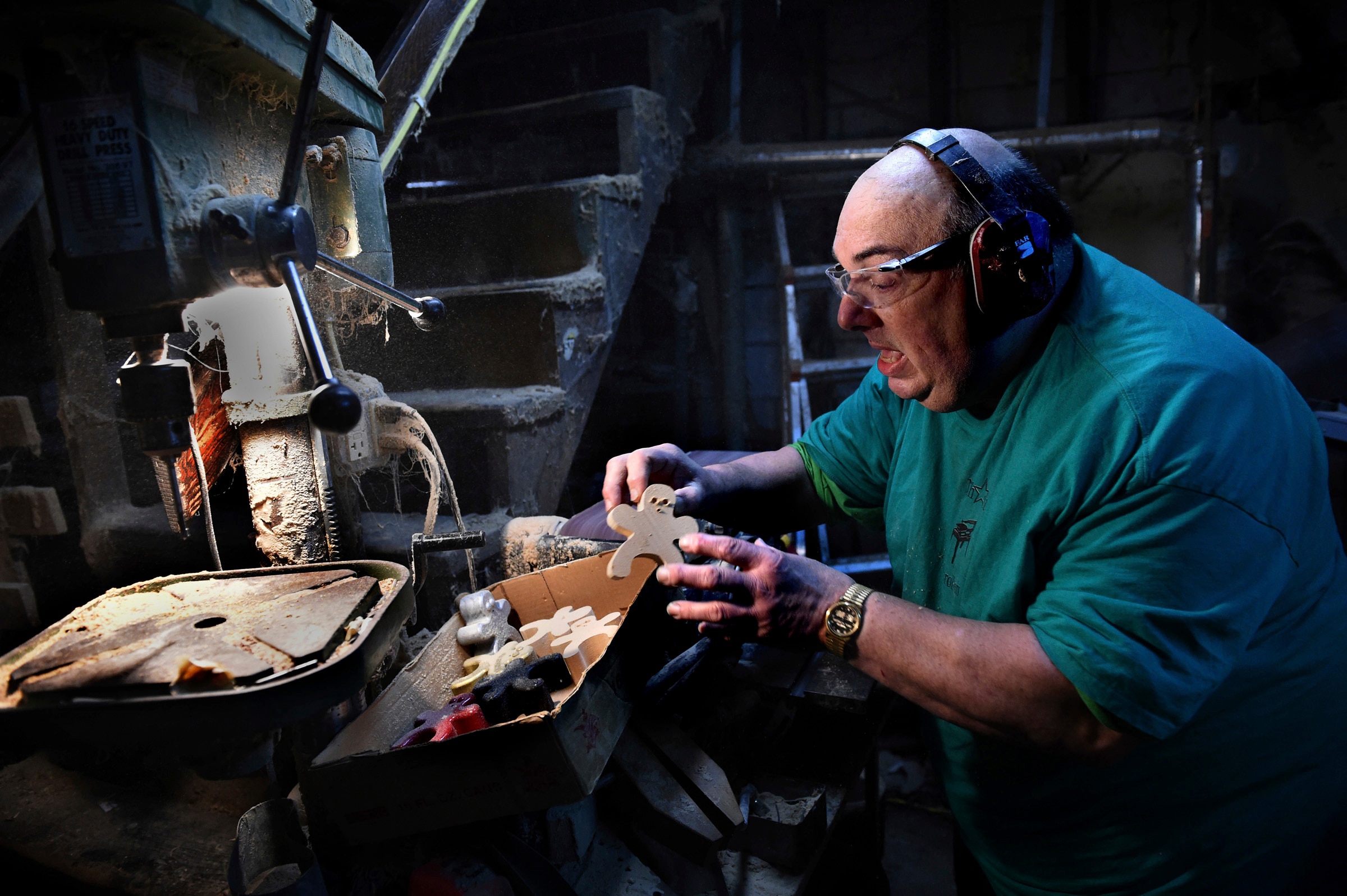 In this Dec. 7, 2016 photo, Phil Lagarde works on a wooden toy in the basement workshop of his Stillwater, Minn. Lagarde spends hours each day building wooden toys that he is donating this holiday season to the Washington County Jail.
Photo Credit: Jean Pieri/Pioneer Press via AP
"It's something I like to do," he said. "It keeps me off the street and out of trouble. At least I'm not one of those guys sitting in a bar, drinking my lunch. You know what they say: 'Whoever ends up with the most toys, wins.' "

Lagarde grew up in Duluth, Minn., and graduated from Duluth Cathedral High School in 1966. The second-oldest of five boys, he said he was not encouraged to pursue art as a career. "To tell you the truth, in the neighborhood I grew up in, a boy was not an artist," he said.

He attended cooking school in Rochester, Minn., and then enrolled in the Air Force. He was stationed at Fairchild Air Force Base outside Spokane, Wash., where he served as an aircrew survival and protection specialist.

After his discharge, he enrolled in Eastern Washington State College in Cheney, Wash., graduating in 1976 with a bachelor's in food and nutrition. He moved back to Minnesota later that year and worked for restaurants in Duluth, Crystal, Bloomington, St. Louis Park, Golden Valley, Minneapolis and Afton.

His longest stint was at the Afton House Inn, where he oversaw Sunday brunch and meals served on the Afton-Hudson Cruise Lines. But after 15 years, he said, it was time to try something new.

"You know the old saw, 'If you can't stand the heat, get out of the kitchen,'" he said. "After 30 years, I was getting a little tired of cooking."

In 2000, he took a job working the night shift at International Paper in Arden Hills; he retired in 2015.

But he's happy to have all his hard work bring joy at this time of year, he said.

"I was at a store a little while ago, and the clerk asked, 'How are you?,'" he said. "I told her I was mean, vicious, rotten and cruel. She said, 'You must have a very short Christmas list.'

Secretary of Veterans Affairs Denis McDonough talks about how the VA wants to vaccinate a massive population that includes veterans, their families and caregivers, among others, and outlines how COVID-19 booster shots may be on the horizon.
Close
Now Playing

Bedbugs on a sub and the Army's future vehicles | Defense News Weekly, 3.26.21