The U.S. Air Force lost a Nagasaki-style bomb 66 years ago. A Canadian man may have found it

The Canadian military plans to dispatch a ship off the coast of British Columbia to investigate a diver's claim that he found a bomb lost in 1950 when a U.S. B-36 crashed en route from Alaska to Texas.

Diver Sean Smyrichinsky told the Vancouver Sun that he spotted something unusual off Pitt Island in the Haida Gwaii archipelago, describing the find to his friends as a "UFO." A couple of days later, Smyrichinsky recalled the story to some fisherman.

"Nobody had ever seen it before or heard of it, [because] nobody ever dives there," he said. "Then some old-timer said ‘Oh, you might have found that bomb.’"

"That bomb" was a nuclear device that was dumped or exploded off the B.C. coast on Feb. 13, 1950, when an American B-36 bomber crashed while en route from Alaska to Texas. It was packed with lead — not plutonium — and TNT. 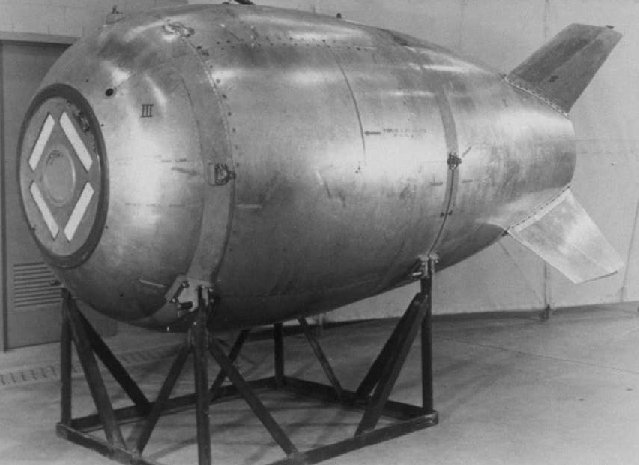 A Mark IV "Fat Man" bomb, an improved postwar mass-production version of the plutonium bomb design used during World War II.
Photo Credit: TKN via Wikimedia Commons
The crew ditched the B-36 after ice built up on the plane's wings and three of its six engines caught fire.

The bomber's mission included a simulated drop on San Francisco using a dummy version of the Mark IV bomb, which is similar to the nuclear bomb dropped on Nagasaki, Japan. They dumped the bomb before ditching because, packed with explosives, it still could've caused major damage on impact.

Five members of the plane's crew died. Another 12 were rescued after parachuting onto Princess Royal Island.

Later, Smyrichinsky found photos online that matched what he found about 50 feet under water.

Smyrichinsky sent details of his discovery in an email to the Canadian military, which plans to take a look within a few weeks. A military spokesperson told the Guardian that the device would pose little risk of nuclear detonation:

"Nonetheless we do want to be sure and we do want to investigate it further," he said. A team specialising in unexploded ordnance will determine what risk, if any, the object poses and whether it should be retrieved from its resting place or left as is, he added.

If confirmed, Smyrichinsky may have uncovered the remains of the first known "broken arrow" — the code name given to accidents involving American nuclear weapons, according to the Guardian.
About Stephen Weigand