A middle school in Maryland received an unexpected visit Monday morning when an Air Force UH-1 "Huey" had to make a landing on school grounds.

The helicopter’s transmission warning light turned on, and the crew made a precautionary landing at the school, said Staff Sgt. Chad Strohmeyer, a spokesman for Joint Base Andrews, Maryland.

There were no injuries, and it appears the helicopter is undamaged, Strohmeyer told Air Force Times. Maintenance crews from Andrews are on site, determining if the aircraft is safe to fly back to the base.

The school, Gwynn Park Middle School, is about 8 miles south of Andrews near an area known as Brandywine, a suburb of Washington.

Prince George’s County Public Schools spokeswoman Lynn McCawley told Air Force Times that all the students were inside the building at the time, and the landing did not disrupt classes.

In April 2015, another Andrews Huey had to make an unplanned landing at a school, that time in Alexandria, Virginia, about 10 miles west of the base.

Students at the William Ramsay Elementary School got a chance to go outside to watch the maintenance crews checking over the aircraft, and to talk with the crew. 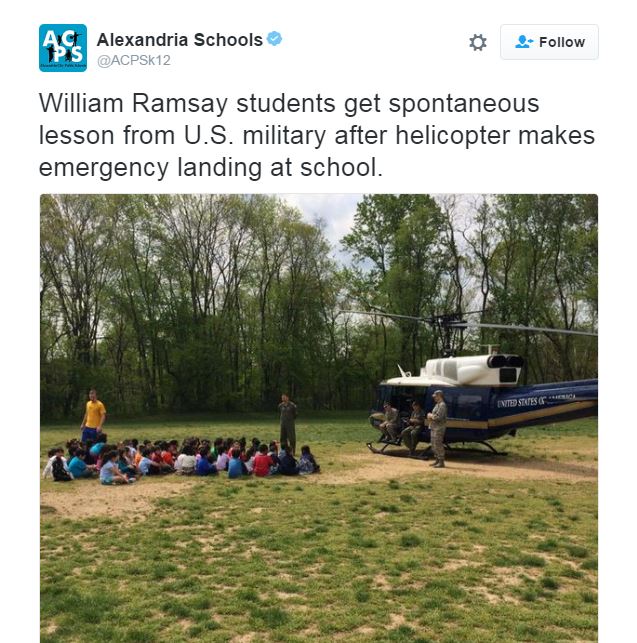 With war nearby, US troops show support for Poland on military holiday