ANCHORAGE, Alaska — A month after the second most powerful earthquake ever was recorded, the Alaska port community of Valdez remained in ruins.

A hulking Alaska National Guard cargo plane’s mission April 25, 1964, was to deliver Gov. William Egan to oversee efforts to rebuild the town on a new site after the magnitude 9.2 earthquake.

After dropping off Egan and surveyors, the twin-engine Fairchild C-123J Provider took off in a heavy snowstorm to return to Anchorage carrying the Guard’s adjutant general, Maj. Gen. Thomas P. Carroll, and three others.

Three minutes later and about a mile (1.6 kilometers) due west of where more than 30 people died when the earthquake ripped apart the city dock, the plane struck the water head-on, at full speed, killing all on board. Despite rescue efforts, it quickly sank to the bottom of Prince William Sound.

The Valdez plane crash made national headlines but has mostly faded from memory for all but a few, including surviving family members and Chuck Volanti.

The former Air Guardsman, who arranged the fateful flight as dispatcher, has been working for four years from his home in Olympia, Washington, to honor those lost in the humanitarian mission. On Saturday, his efforts were realized at the unveiling of a memorial he and Valdez City Clerk Sheri Piece helped design.

“The crew, what can I say?” Volanti said. “They were decorated veterans. We were close, like family.” 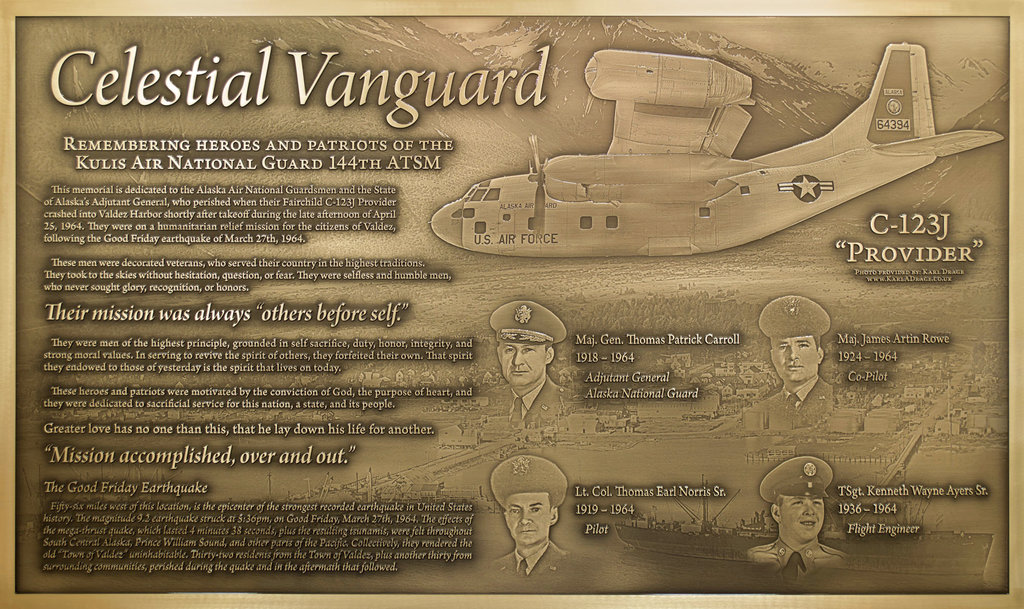 This photo provided by Innovative Signs, Inc. in Longwood, Fla., in June 2018, shows a memorial plaque that was dedicated Saturday, June 23, 2018, in Valdez, Alaska. It honors four Alaska Air National Guard members who died in a plane crash while conducting a humanitarian mission following a devastating magnitude 9.2 earthquake which destroyed Valdez in March 1964. (Photo courtesy Innovate Signs, Inc. via AP)
2 of 7 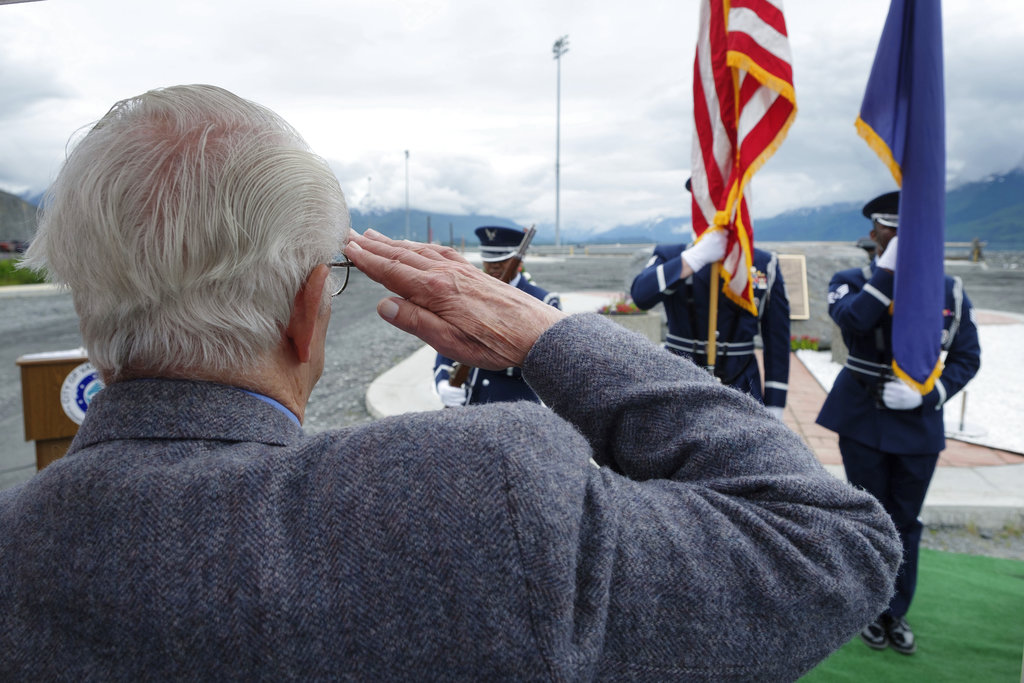 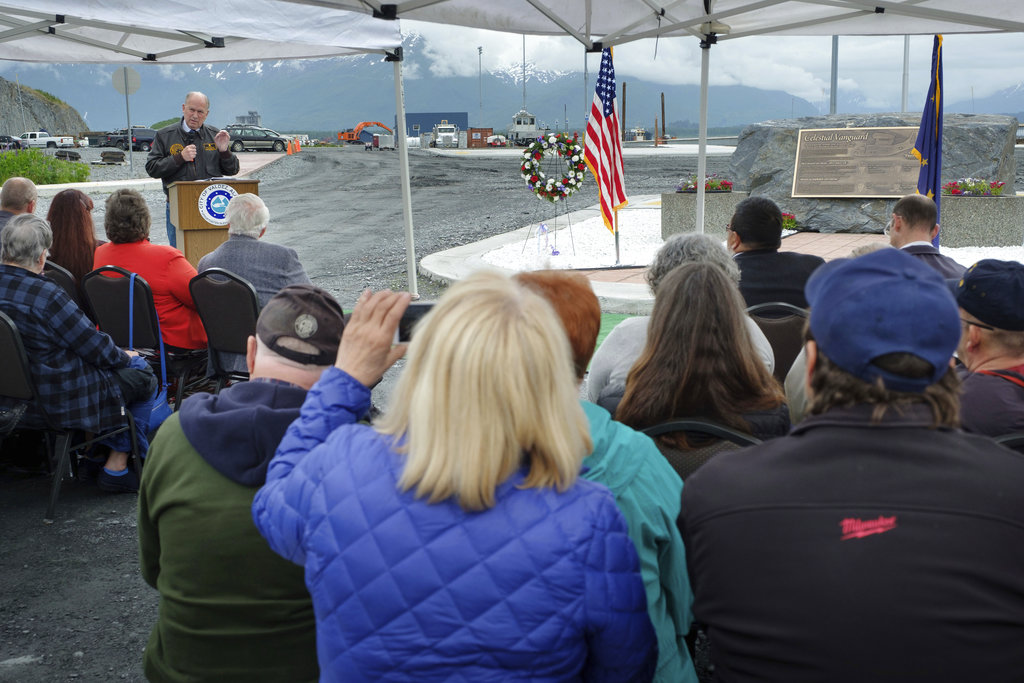 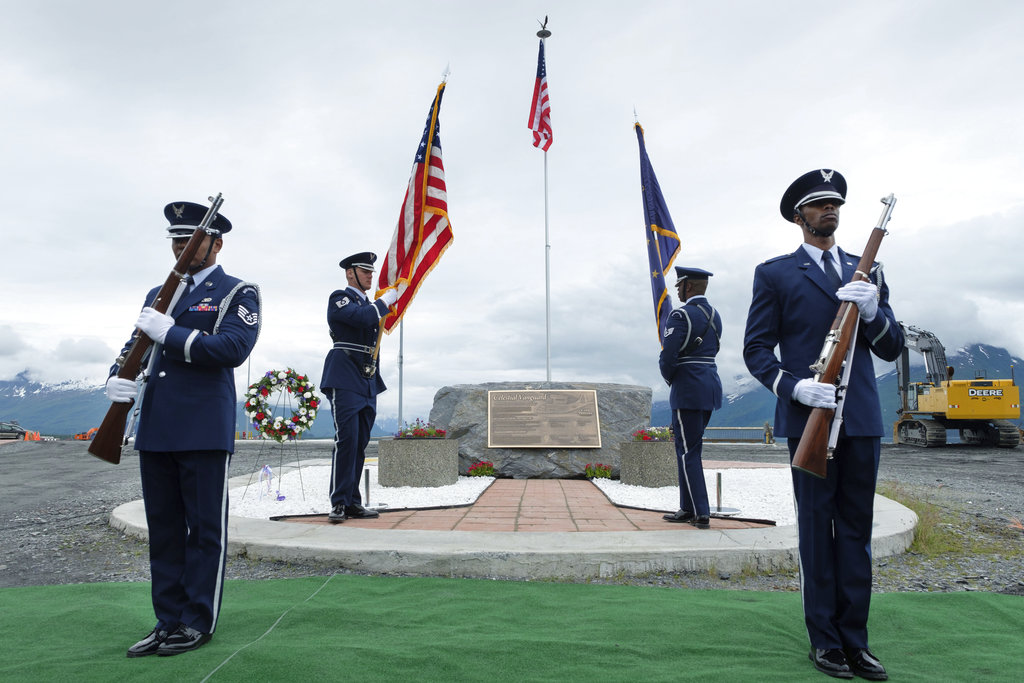 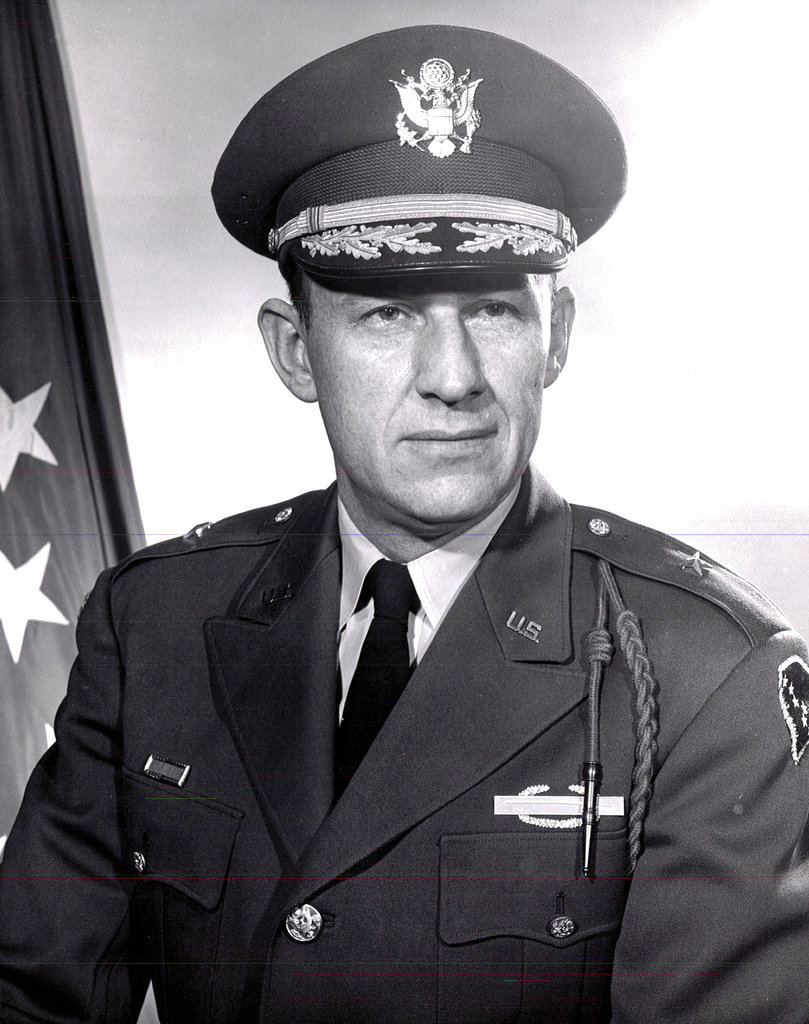 This undated photo provided by the Alaska National Guard shows Maj. Gen. Thomas P. Carroll, the adjutant general who died with three other men in a plane crash near Valdez, Alaska, on April 25, 1964. On Saturday, June 23, 2018, a memorial plaque for the four men killed on the humanitarian mission was unveiled in Valdez, Alaska. (Photo courtesy Alaska National Guard via AP)
6 of 7 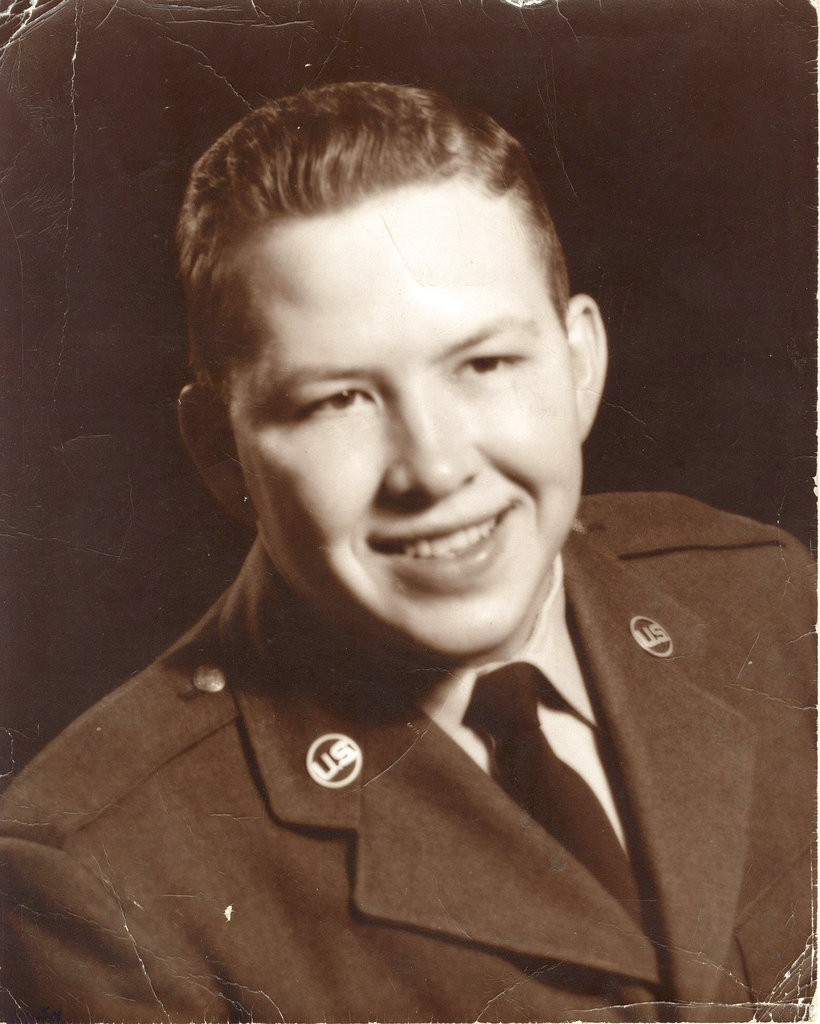 This photo provided by Kenneth Ayers Jr. shows his father, Kenneth Ayers Sr., in his Air Force graduation photo in 1956. The elder Ayers and three other Alaska Air National Guard members died in a plane crash following the 1964 earthquake. A memorial was unveiled June 23, 1964, honoring the four men killed in the crash when conducting a humanitarian mission following the devastating magnitude 9.2 earthquake which destroyed Valdez in March 1964. (Photo courtesy Kenneth Ayers Jr. via AP)
7 of 7 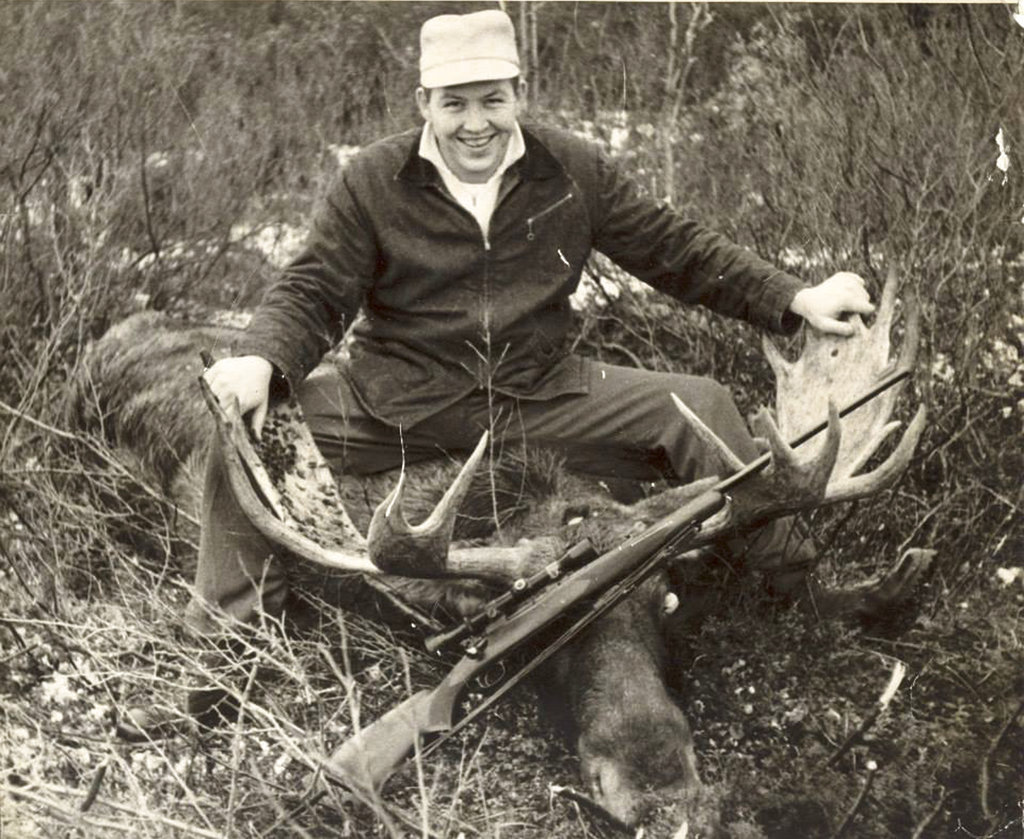 Many relatives of the men killed attended the dedication of the memorial, which carries the likeness of each man. The plaque, in part, says: “They were men of the highest principle, grounded in self-sacrifice, duty, honor, integrity and strong moral values. In serving to revive the spirit of others they forfeited their own.”

Robin Norris Theobald, then 8 years old, vividly remembers the day of the crash, a Saturday. Her father, the pilot, came to her with a question: “You know, I have this flight, and I don’t have to go on it. What do you think I should do?”

“He was just a regular dad, and then he was gone,” she recalled in a phone interview this week from Graham, North Carolina.

She finds comfort that her father and his fellow guardsmen are being honored for their efforts to help people after the earthquake, which caused millions of dollars of extensive damage from Anchorage to Valdez. In all, 131 people died in the quake or from a tsunami that killed people from Alaska to California.

“I’m just glad they remember him in that light, for the good he was doing,” Theobald said.

Ken Ayers Jr. had his entire family at the ceremony to honor his father, the flight engineer.

He was only 21 months old when the plane went down, but he learned from his mother, Nettie Jo, about his father’s love for fishing and hunting. That’s what drew the family back to Alaska after his father’s active service days in the Air Force.

He calls his mother the “real hero” in all this, raising her family and working herself up from the mailroom with the U.S. Fish and Wildlife Service to being the agency’s head of procurement for Alaska.

She died in 2014, but he says she would be proud of the memorial. “I think she’d be very pleased, certainly,” he said.

Carroll was honored a month after the crash in a speech on the U.S. Senate floor by Sen. Bob Bartlett, an Alaska Democrat.

“In addition to his family, the Alaska Guard and the state have suffered a terrible loss. For all of us who knew him, admired him and felt a deep affection toward him. All of us shall miss him.”

The night Carroll died, Egan had invited him to spend the night in Valdez and attend a dinner with him because of the poor weather. “I didn’t bring my fork,” Carroll joked when begging off on the invitation and promising to return the next day to pick up Egan, the Fairbanks Daily News-Miner reported at the time.

One of Carroll’s sons, Thomas C. Carroll, reached the rank of brigadier general. He also became adjutant general of the Alaska National Guard and also died in a plane crash. The younger Carroll’s plane went down in 1992 near Juneau.

Rowe, the co-pilot, gained fame in the immediate aftermath of the earthquake. The Anchorage airport radio tower was destroyed in the quake, so Rowe circled Alaska’s largest city in a C-123 cargo plane, warning off other aircraft from attempting to land and turning his plane into an emergency radio tower, relaying what he could see to the outside world.

The Army investigates a Green Beret's fatal parachute accident. New squad weapons are on their way to replace the SAW and M4. A Marine commander is fired in the aftermath of the sinking of an AAV, and the British Royal Navy shows how it might use jetpacks to quickly board ships at sea. All that and more on The Briefing for 10.22.20.
Close
Now Playing

The end of tanks? A midair collision and napping for lethality — The Briefing 10.8.20