The Air Force on Thursday identified the Thunderbirds pilot killed in the F-16 crash at the Nevada Test and Training range as Maj. Stephen Del Bagno.

Del Bagno was killed at about 10:30 a.m. Wednesday during what the Air Force called a routine aerial demonstration training flight.

“We are mourning the loss of Maj. Del Bagno,” Brig. Gen. Jeannie Leavitt, commander of the 57th Wing at Nellis Air Force Base in Nevada, said in a release. “He was an integral part of the team, and our hearts are heavy with his loss. We ask everyone to provide his family and friends the space to heal during this difficult time.”

Del Bagno, of Valencia, California, was an experienced pilot in his first season with the Thunderbirds, according to his biography on the squadron’s official website. He was the squadron’s slot pilot and flew its No. 4 jet.

Del Bagno graduated from Utah Valley State University in 2005 and got his commission when he graduated from Officer Training School at Maxwell Air Force Base in Alabama in 2007.

He served as an F-35A evaluator pilot and chief of standardization and evaluation with the 58th Fighter Squadron at Eglin Air Force Base in Florida before joining the Thunderbirds. He also was a civilian flight instructor, corporate pilot, skywriter and a banner tow pilot before joining the Air Force.

The Thunderbirds website said Del Bagno had more than 3,500 total flight hours in 30 different aircraft, including 1,400 hours as an Air Force pilot.

Del Bagno, whose call sign was Cajun, was the first F-35 pilot to serve on the Thunderbirds, Nellis said in a June 2017 release announcing the newly-added members of the 2018 team. As the Thunderbirds’ slot pilot, Del Bagno flew in close formation, just behind the team’s No. 1 aircraft and between the lead aircraft’s two wingmen to create its signature diamond formation.

He was photographed shaking hands with Vice President Mike Pence when Pence visited the Thunderbirds hangar at Nellis Jan. 11. 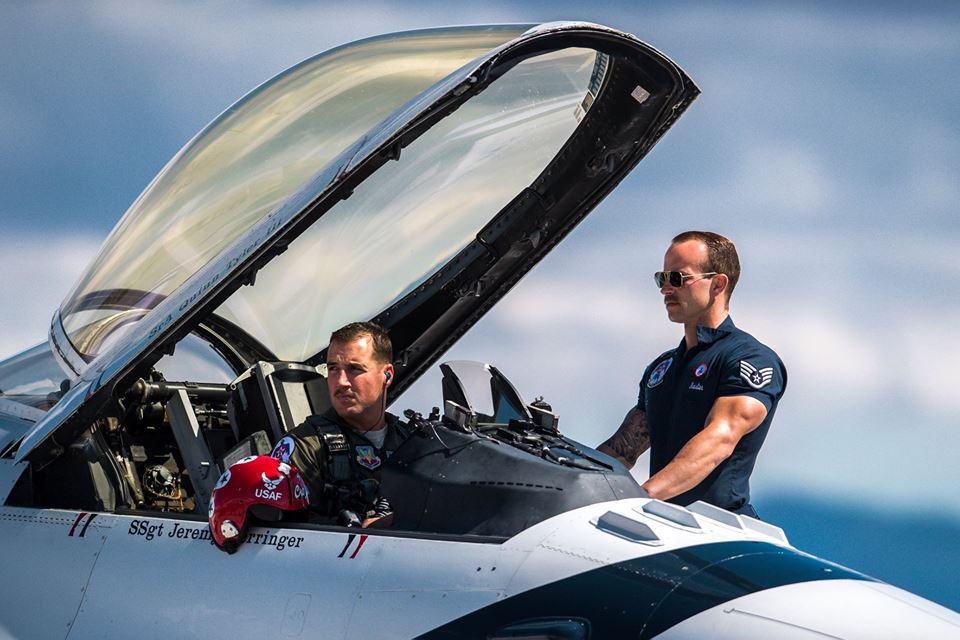 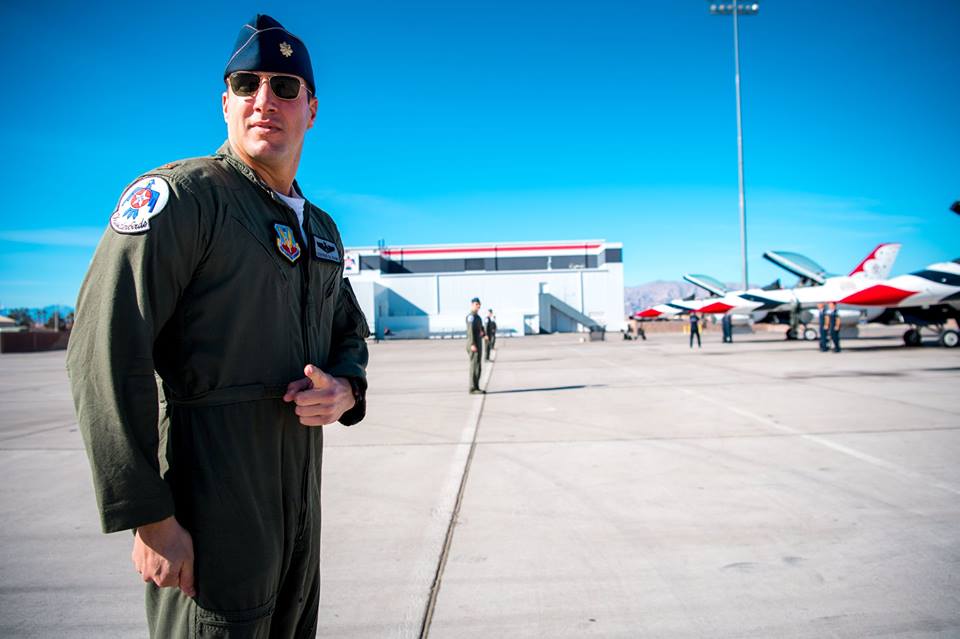 Thunderbirds pilot Maj. Stephen Del Bagno prepares to board his F-16 Fighting Falcon during a modified ground show practice at Nellis Air Force Base, Nevada, Jan. 26. Del Bagno was killed when his aircraft crashed on the Nevada Test and Training Range during a practice aerial demonstration on April 4. (Master Sgt. Christopher Boitz/Air Force)
3 of 6 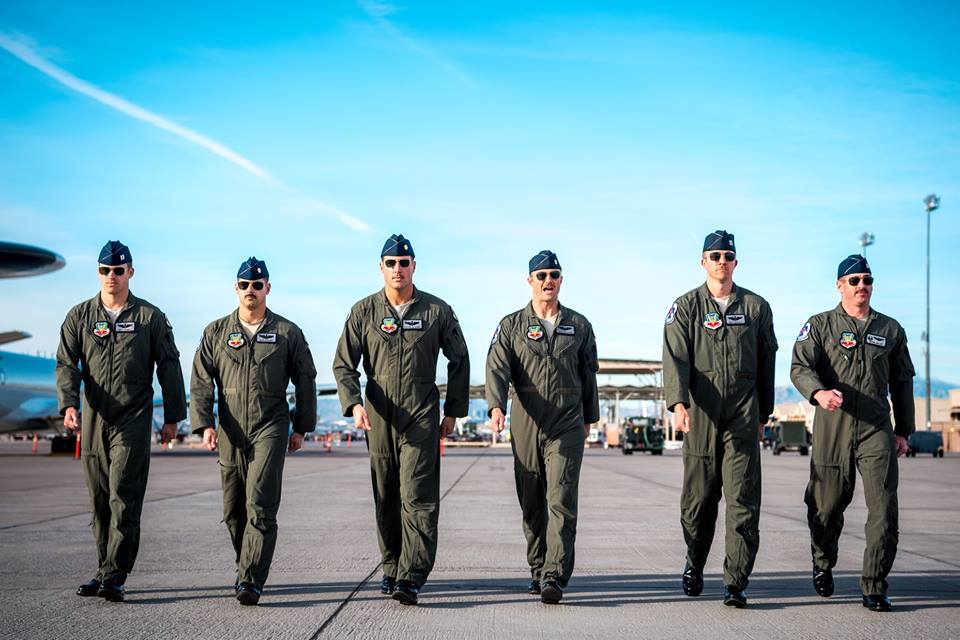 Maj. Stephen Del Bagno, third from left, and his fellow Thunderbird pilots march to their F-16s during a practice show at Nellis Air Force Base in Nevada, March 14. (Master Sgt. Christopher Boitz/Air Force)
4 of 6 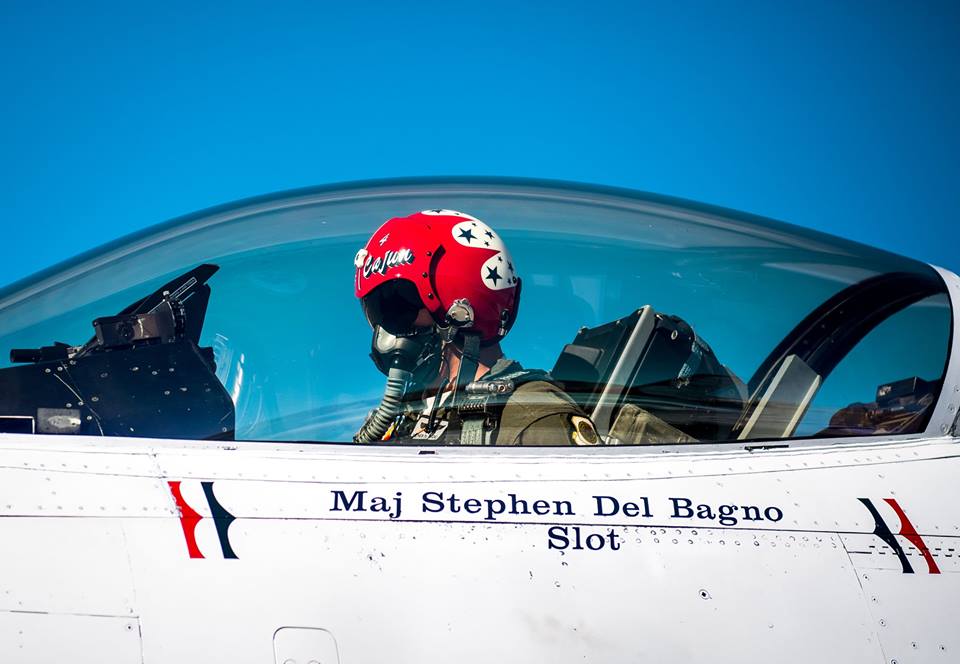 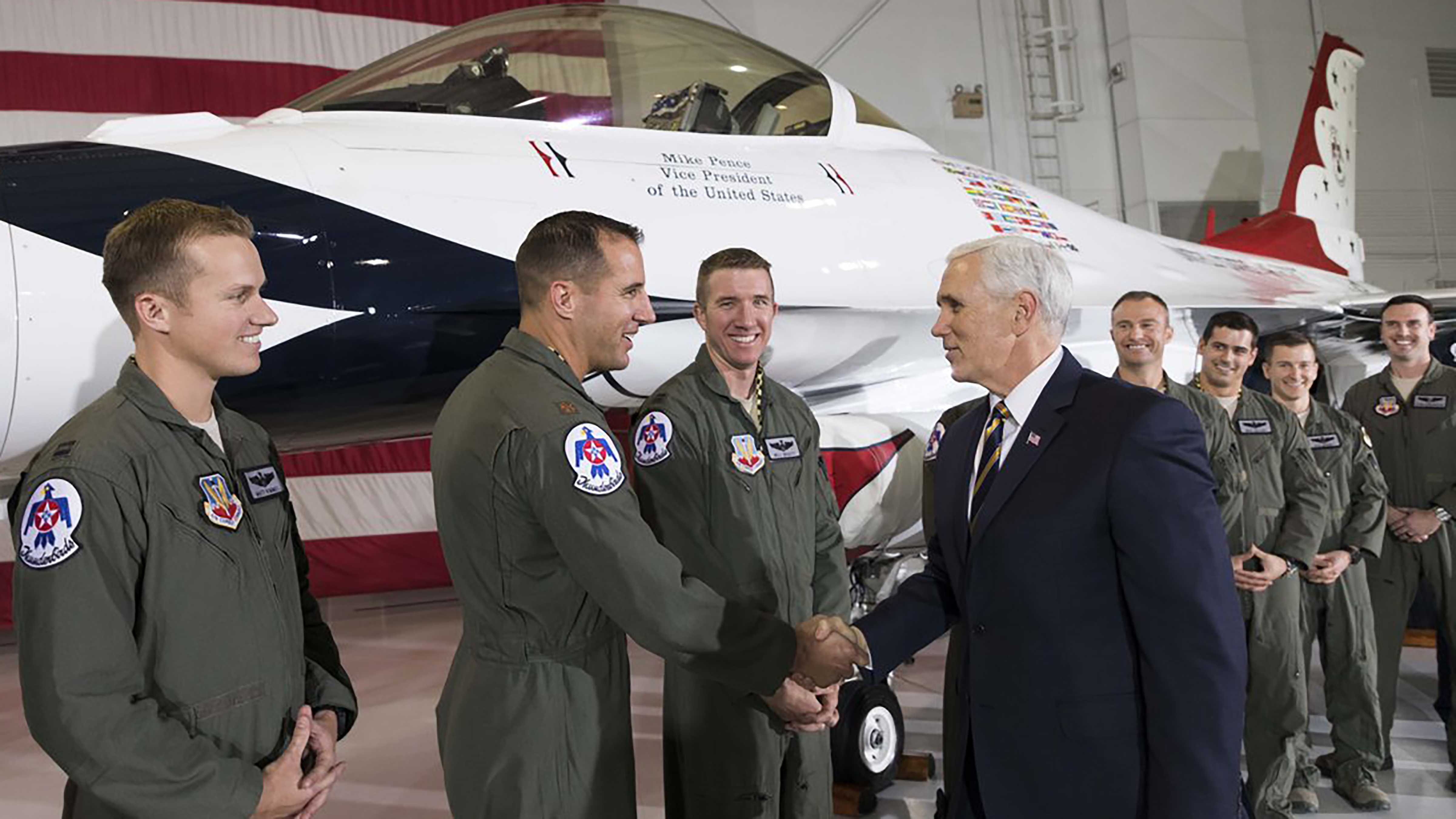 Maj. Stephen Del Bagno, a pilot for the Thunderbirds, shakes hands with Vice President Mike Pence during his visit to Nellis Air Force Base Jan. 11. (Air Force)
6 of 6 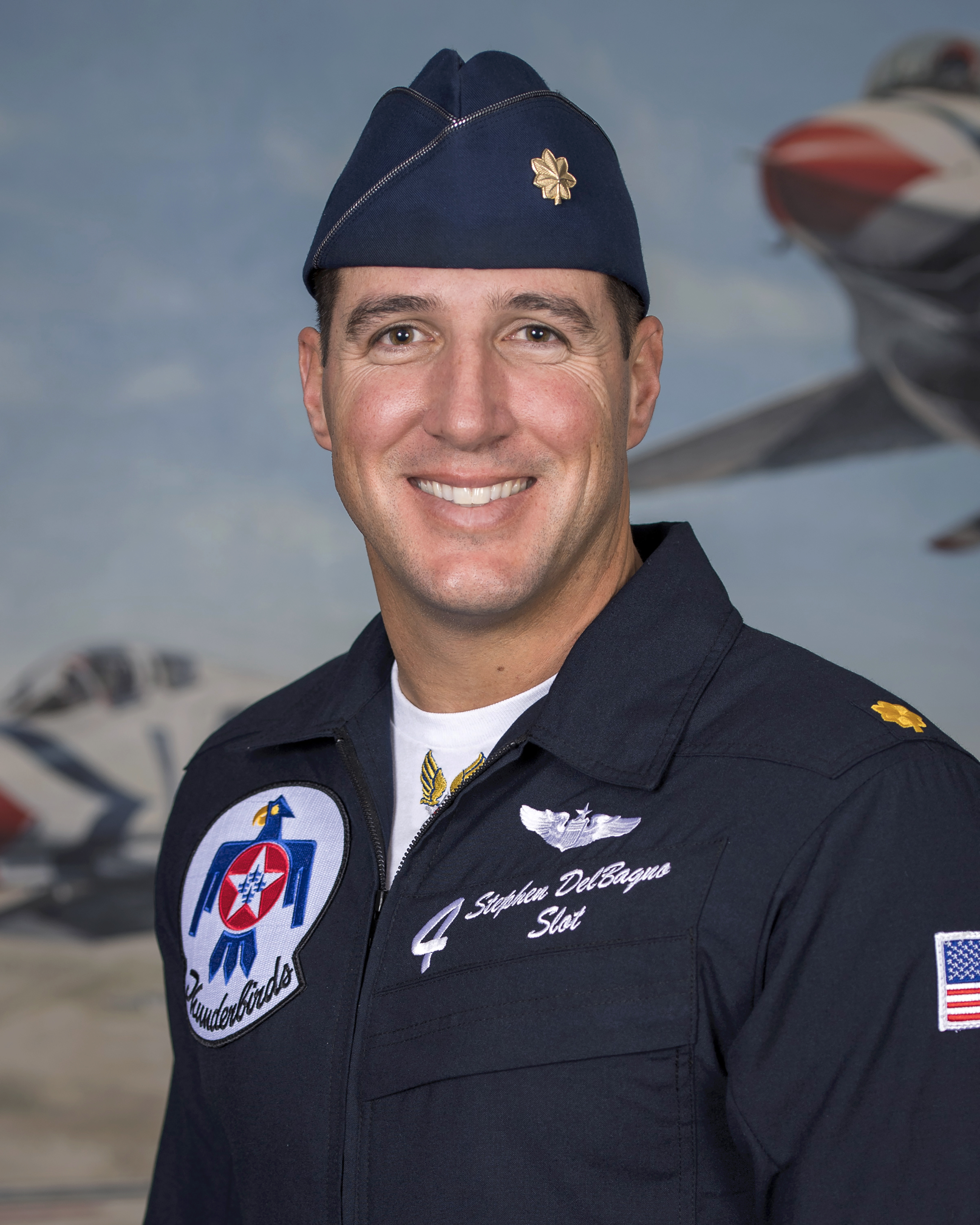 Del Bagno’s excitement at becoming a full-fledged member of the team was evident in a Jan. 30 video documenting the moment he and other newly-minted Thunderbirds received their iconic red flight helmets.

“Today was a fantastic day,” Del Bagno said in the video. “It’s an important milestone for the Thunderbirds, putting on the red helmet. Once you don that red helmet, it means you no longer have your instructor in the back seat. So it’s a bit surreal. The safety net’s gone, you’re on your own. It was just fantastic.”

Did you know our pilots have to earn their red helmet? #AFThunderbirds Next up, the Delta!

The service’s top leaders released statements expressing their condolences prior to the announcement.

“I am deeply saddened to hear of the loss of one of our Thunderbird pilots today,” Air Force Secretary Heather Wilson tweeted Wednesday evening. “My thoughts and prayers are with all those affected as they grieve and remember their family member, Wingman, and friend.”

I am deeply saddened to hear of the loss of one of our Thunderbird pilots today. My thoughts and prayers are with all those affected as they grieve and remember their family member, Wingman, and friend. https://t.co/qQ74LXOcTt

“Dawn & I are mourning the loss of one of our Thunderbird pilots today,” Chief of Staff Gen. Dave Goldfein said in a tweet early Thursday.

Dawn & I are mourning the loss of one of our Thunderbird pilots today, who died in an F-16 crash near Nellis Air Force Base. Please join us in honoring our fallen Airman & sending heartfelt condolences to the pilot's family, teammates, friends & all who are grieving. https://t.co/HPcXvn68px

Nellis also switched the profile picture on its official Twitter account to an image of the Thunderbirds logo with a black band across it.

The Air Force said that the Thunderbirds have canceled their appearance at March Air Reserve Base’s March Field Air & Space Expo. No decision has yet been made on whether to cancel the 2018 Thunderbirds season after the crash.

The tragedy comes after a series of challenging incidents faced by the Air Force’s elite aerial demonstration team, which is formally known as the U.S. Air Force Air Demonstration Squadron.

Last June, an F-16D from the Thunderbirds crashed at the Dayton International Airport in Ohio when it landed too fast, skidded off a wet runway and overturned in the grass, destroying the $29 million fighter and injuring the pilot.

The Thunderbirds’ former commander, Lt. Col. Jason Heard, was relieved of command last November after Leavitt, commander of the 57th Wing at Nellis Air Force Base in Nevada, “lost confidence in his leadership and risk management style,” the Air Force said at the time. Heard took command in January 2017, and was relieved at the conclusion of the 2017 season.

And in June 2016, a Thunderbird pilot crashed after a flyover of the Air Force Academy’s graduation ceremony. The Accident Investigation Board that reviewed that incident said the crash was caused by a malfunctioning throttle trigger. That pilot safely ejected, but the $29 million F-16CM was destroyed.

Unclassified footage of Iran's tactical ballistic missile strikes on Ain al-Asad air base Jan. 8, 2020. No one was killed in the attack, but 110 people were treated for traumatic brain injuries. (Central Command)
Close
Now Playing