Greg Gangnuss remembers hearing a helicopter above his small office building in Kabul, Afghanistan, on Oct. 11, 2015, and thinking, "Hmmm."

For the Air Force civilian engineer, there on a voluntary deployment as a senior environmental adviser to the Afghan Ministry of Defense, the sound of helicopter traffic at the NATO headquarters for the Resolute Support Mission was routine. But he knew the position of this helicopter, almost directly over his office, was "not right."

Seconds later, a British Puma Mk 2 with nine people aboard dropped out of the sky like a stone and crashed within 10 or 20 yards of his building.

Gangnuss immediately sprinted out the door and into a whirlwind of dirt, debris and smoke. Just ahead, he could see the helo lying on its right side, its compartment crushed.

Air Force Col. Laurel "Buff" Burkel, a passenger in the chopper, deployed as an adviser to the Afghan air force.

She and three members of her team — in country to help set up personnel systems for the fledgling air force — had boarded the aircraft, part of a two-ship formation, at 4:15 p.m. for the short jump from their headquarters at Forward Operating Base Oqab to brief her Afghan counterpart.

When they arrived at NATO headquarters after a three-and-a-half minute ride, there were 40 Afghans on the landing zone, which doubled as a soccer field.

"I remember thinking, as an aviator, ‘Hmmm,’" recalled Burkel, a C-130H navigator.

The pilots began to circle back around while they waited for the landing zone to clear, but in doing so apparently became distracted in an attempt to identify nearby no-fly zones over key buildings on the ground, namely the presidential palace and the Afghan Defense Ministry, according to an accident investigation by the British Defence Safety Authority.

Losing sight of the lead helo, the pilots tried to adjust their flight path by making a relatively sharp right turn at an altitude of about 500 feet. The move brought them perilously close to the tether line of a Persistent Threat Detection System intelligence, surveillance and reconnaissance blimp on the southwest edge of the compound.

The pilot made a last-minute attempt to avoid the .58-inch tether, but caught it midway along the main rotor blades on the right hand side of the aircraft. The tethers are designed to break when struck, as they always had in a handful of other incidents, but not in this case.

For the next 17 seconds, the pilots struggled to control the aircraft, and it responded to their inputs — at first.

The main rotor blade drew the tether onto the right of the tail cone.

"As it then crossed over the tail, tension on the tether increased to such an extent that it failed," the report states. "Having failed, and under tension from the base station, the tether ‘whipped’ down the left side of the tail cone and was then pulled back over the airframe."

Less than seven seconds later, the aircraft lay crumpled on the ground. 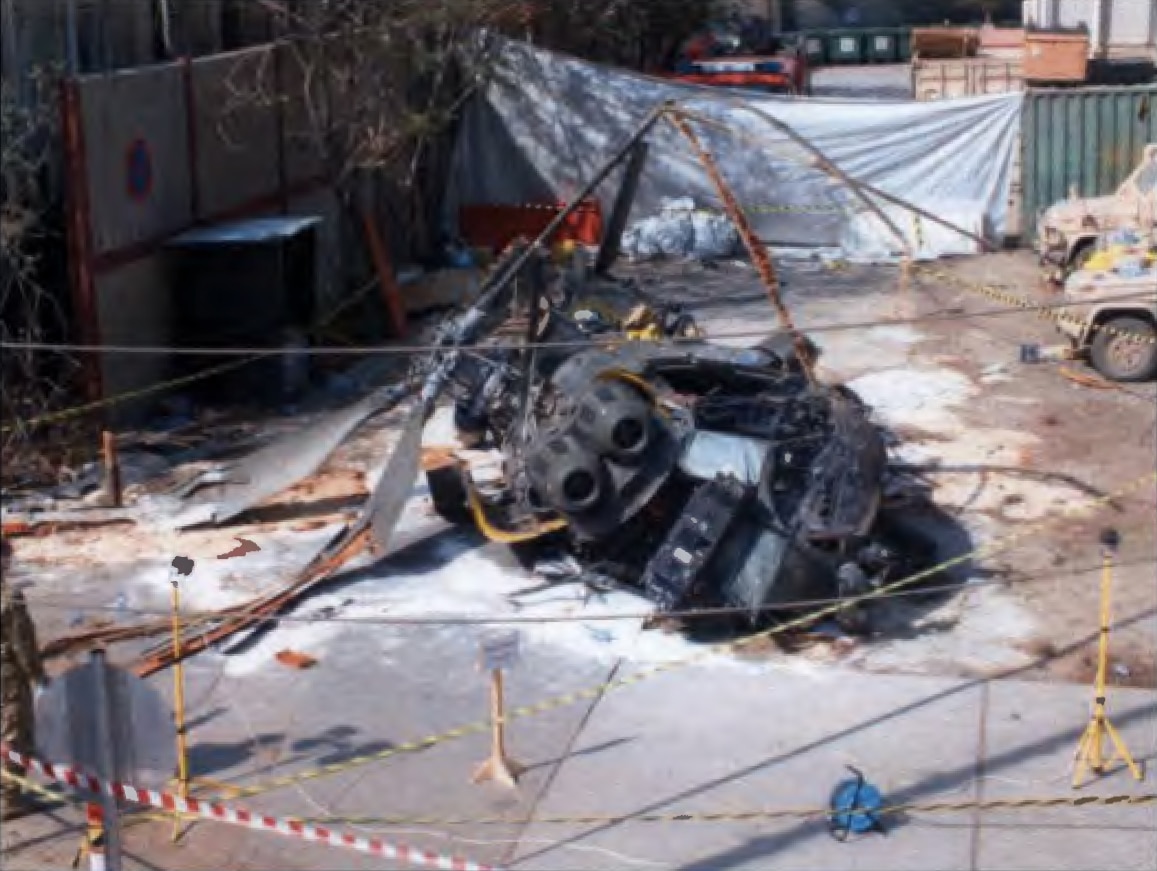 "The last thing I personally remember was the sensation of spinning and tumbling, and then just subconscious confusion and chaos," Burkel said.

Gangnuss and Army Maj. Reuben Trant were among the first to reach the helicopter. He saw the two pilots laying on top of each other, unresponsive, then glimpsed a hand out the side of the bird.

"I was hoping the helo was carrying cargo, maybe just mail or something, but when I saw the hand I knew, ‘No, there’s people in there,’" Gangnuss said. "I called some people over to get the pilots out of the cockpit, then climbed on top of the helicopter."

Trant, who had grabbed a fire extinguisher, went to work to prevent the helicopter from catching fire. The ruptured fuel bladder under the cabin floor had released about 770 pounds of fuel on impact, and it was pooling inside the aircraft, presenting a real danger of fire and explosion.

Outside, rescuers sloshed around in ankle-deep puddles of it. Trant was soon joined by others in the critical effort.

The accident investigation report found that the pilots were able to turn off the engines seconds before impact. Burkel credits this action with saving the lives of everyone who survived.

On top of the helo, Gangnuss and others pulled the cabin door off, and he and a Marine gunnery sergeant, Geann Pereira, climbed into the narrow space.

"The inside was filled with personal belongings, metal debris. Everything had been compressed upwards toward the fuselage," Gangnuss said. "You could see the bottom of boots, and you know there’s people attached to these boots."

Using their hands and a bolt cutter, Gangnuss and Pereira began to clear out the compartment to get to the people.

When a British medic arrived, they got him into the compartment immediately, and he began taking victims’ pulses through their toes.

Meanwhile, others were helping to get the pilot and co-pilot out of the cockpit. Another officer was released from his harness and carried out of the aircraft.

Gangnuss, Pereira and the medic, now working on their bellies, pulled a French contractor, Gordon Emin, out of the wreckage, but he would not survive. An American contractor, Roy Tippett, a member of Burkel’s team, did survive.

Marine Capt. Trey Kennedy, standing in several inches of fuel, was able to reach through the window to remove a passenger’s seatbelt, then moved inside to help pull him out the passenger door.

Then he, Gangnuss and others came across Burkel.

"Greg and others have filled me in that ... I was yelling ‘Get me out of here,’" Burkel said.  She was in bad shape.

The impact of the crash threw her head back, nearly decapitating her.

Though they didn’t know the extent of her injuries, rescuers took care to stabilize her with neck braces and a backboard before passing her to waiting hands on the other side of the aircraft.

They later learned she had broken her neck. A spinal cord injury to the C-2 vertabrae, or axis, typically kills or paralyzes the victim. Their care saved her life. 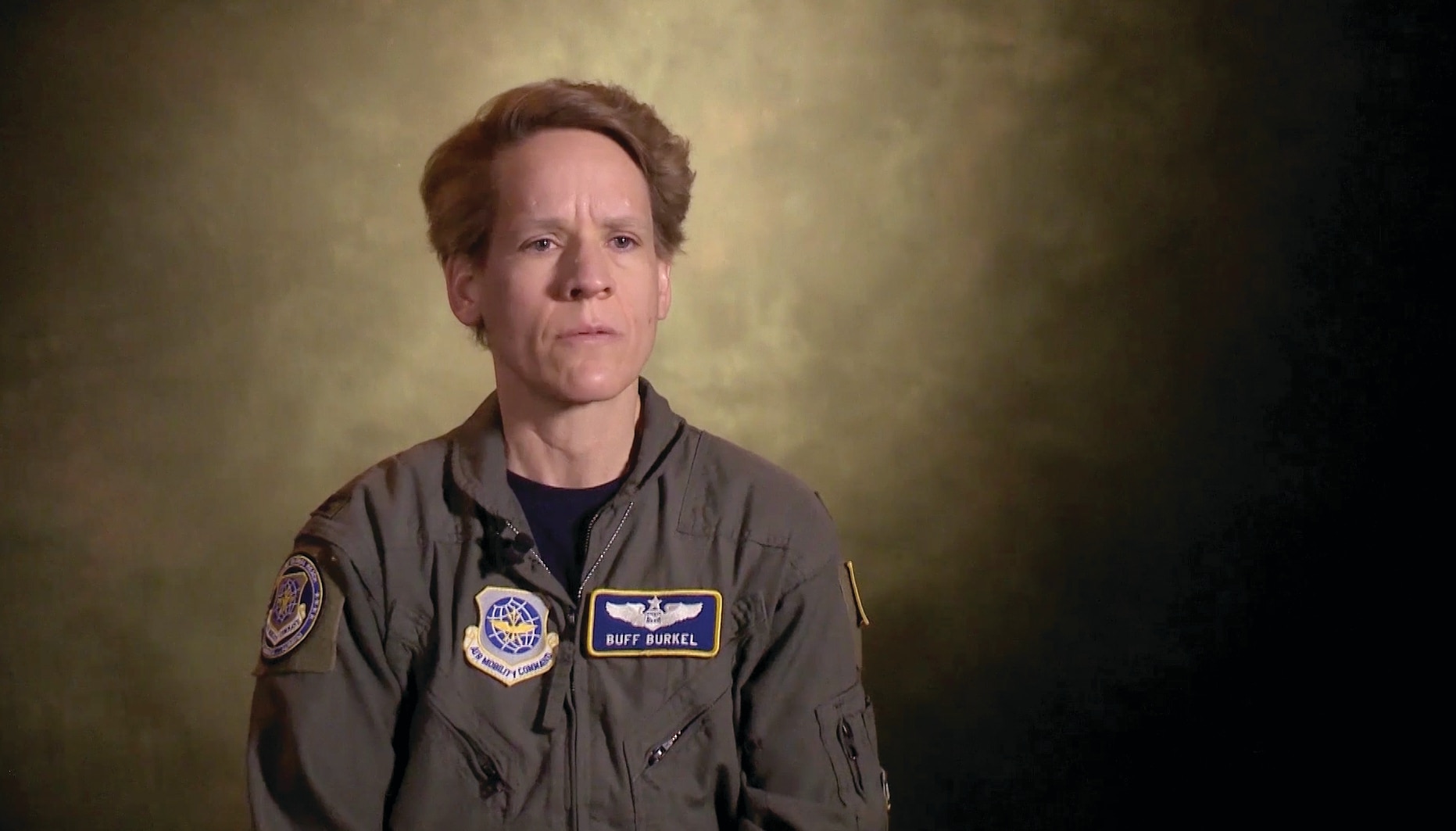 Col. Laurel "Buff" Burkel, a C-130H navigator, survived a broken neck and is now back on flying status.
Photo Credit: James Buehler and James Truitt/Air Force
Her chances of recovery improved again when an unidentified Navy lieutenant commander, a passenger on the first helicopter, came running up to the scene. The officer, who had training as a paramedic, immediately instructed rescuers on the ground to "lock her down."

"If I had turned my head I could have wound up killing myself," Burkel said.

Now soaked in blood, sweat and fuel, the men inside the helicopter toiled on.

At one point, Gangnuss asked the rescuers outside to stop spraying fire retardant because it was choking the air.

Night began to fall and brought with it the most disturbing part of the entire event, Gangnuss recalled.

They knew there was a passenger, a Lithuanian soldier, who was still alive and wedged into the tail section.

"I could hear him yelling for help, saying it was hard to breathe in there," Pereira said in a June interview with Marine Corps Times.

To get to him, they had to lie across the bodies of two passengers who had died from their injuries. They were Burkel’s teammates: Maj. Phyllis Pelky and Master Sgt. Gregory Kuhse.

"When you are lying across a person who just a few minutes before was living and breathing …," Gangnuss said, leaving the thought unfinished. "We knew we had to get the person out of there, but, believe me, we were as respectful as we could be for the remains that were there."

As Trant held up a light, they got a backboard into the narrow space and managed to pull the Lithuanian to safety.

The last victims they pulled out were the two deceased American airmen.

Gangnuss finally exited the helo about 100 minutes after he had crawled in.

For his actions, Gangnuss, a former sergeant with the Army’s 10th Special Forces Group, on Feb. 22 was awarded the Air Force Civilian Award for Valor, which honors heroism by those who risk their own safety beyond the call of duty.

He is one of only eight civilians to be so honored in the past five years, according to an Air Force spokesman. 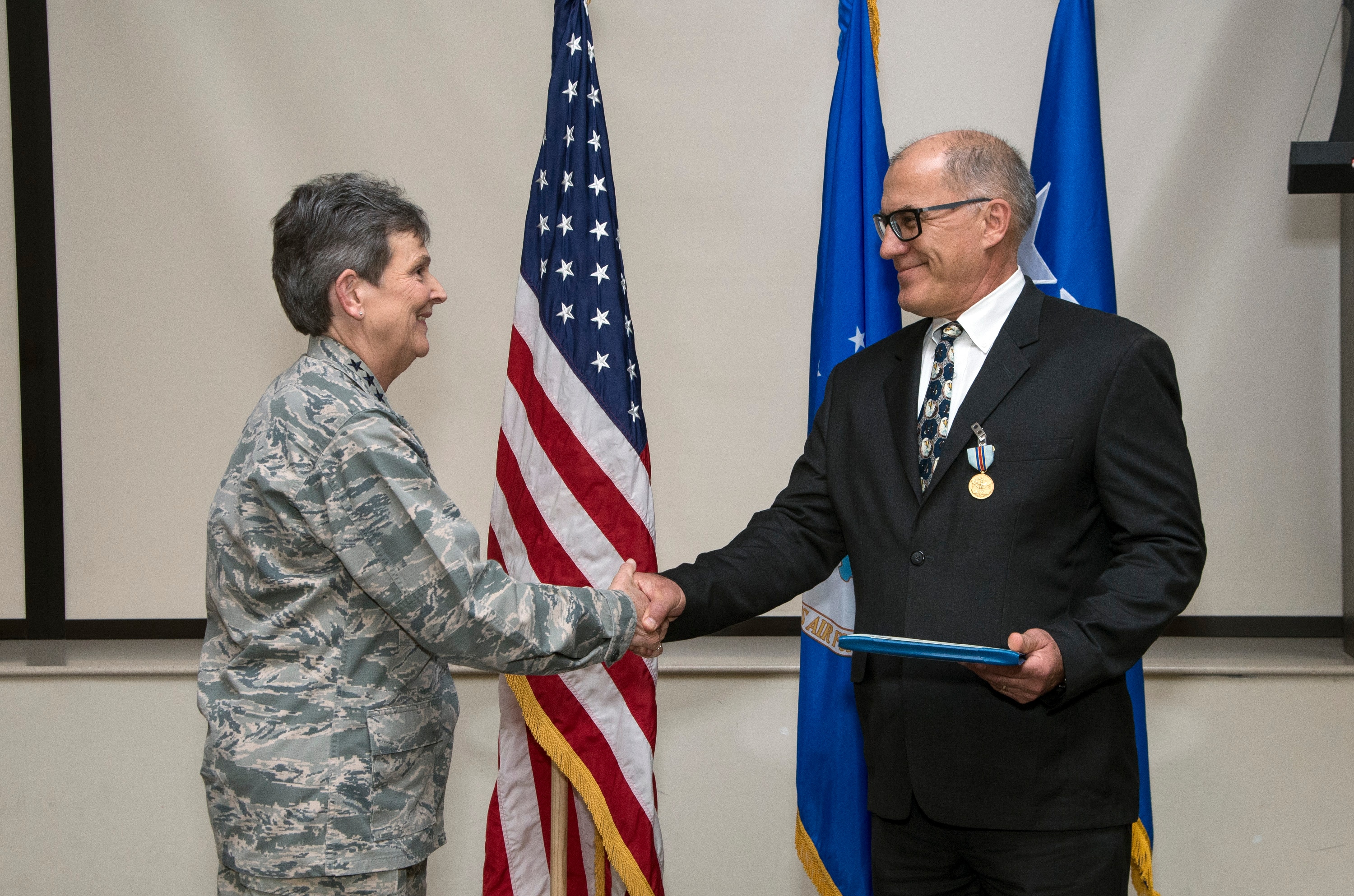 Gen. Ellen Pawlikowski, left, congratulates Greg Gangnuss after presenting him with the Air Force Civilian Award for Valor.
Photo Credit: Courtesy photo
Marines Pereira and Kennedy were awarded the Navy and Marine Corps Medal, the highest non-combat decoration awarded for heroism by the two services. West’s team of airmen and Trant also received awards. But they all say that many others, including coalition forces, made major contributions.

Burkel can certainly attest to that.

She was taken to a medical facility at the Kabul airport, then to Bagram Airfield. The next day, she was able to walk to an aircraft that flew her to Landstuhl Regional Medical Center in Germany.

Fitted with a halo brace to keep her neck and spine from moving while she healed, Burkel spent the next three and a half months recuperating in Germany.

Within a month she started working out, riding an exercise bike and doing planks. Before the halo came off in January, she was doing three and a half minute planks. She was back on full-duty status almost immediately.

She also got a waiver to regain her flight status. As a colonel, she doesn’t expect to be in a flying billet again, but regaining that status was a "very big deal," she said.

Filling in the blanks

Gangnuss, Kennedy and many others have been in touch with Burkel to help explain what happened to her.

She befriended the Lithuanian soldier, who was also recovering at Landstuhl.

"When Trey [Kennedy] came through Ramstein on his way home from the deployment, I went out to the passenger terminal and got to meet him, which was pretty darn powerful," Burkel said.

Burkel later read the accident investigation report, released in September 2016, and it helped fill in some details.

"We could run the same scenario, and 99 times out of a hundred the tether would break, and everyone would be fine," she said. "Unfortunately, it was just not a good day for us. The really amazing thing that I look at when people want to blame the pilots is that in that final seven seconds, they somehow managed to put that helicopter in an attitude where anybody survived."

"You would not know what happened if you saw me, other than little scars on my forehead from the halo," she said.

The events of that day didn’t begin to sink in for Gangnuss until he saw the shattered helicopter, which remained on the ground, covered by a tarp, for several weeks.

"The day immediately following the crash, I walked by that, and that’s when the realization set in that it could have easily blown up," he said. "Thank God, it didn’t. But it gives you a lot of thought, because I have kids. But at the time you’re just thinking about the people in the helicopter."

In May 2016, he returned to his management job at the Air Force Civil Engineer Center at Joint Base San Antonio, Texas.

In thinking about that day, the lives lost, the lives saved, Gangnuss, Kennedy, Burkel and others all voiced similar thoughts.

"I like to think that any of us would go do what Greg and those guys did that day," Burkel said.

A Navy family living off base in Virginia Beach narrowly escaped injury when their house was struck by bullets from a drive-by shooting that left with 17 bullet holes in the wall just feet from where their 8-month-old daughter lay sleeping.
Close
Now Playing