Carlisle, a pilot with more than 3,600 hours flying the F-15, C-17 and other aircraft, logged one final flight in the F-15 at Joint Base Langley-Eustis in Virginia the day before his retirement. He took command of ACC in October 2014 after spending two years as commander of Pacific Air Forces.

"As I stand before you today, and I look back on my time at ACC, I have tremendous pride in everything that Air Combat Command has accomplished over the time I've been in command," Carlisle said in his farewell speech at Langley. "From our in-garrison combat operations, to our forward-stationed airmen, to our units that are continuously deployed supporting combatant commanders around the world, our airmen are simply amazing."

Carlisle also said he has "absolute and complete confidence" in Holmes and his wife Sara, and called them "exactly the right team to lead this command into the future and into greater heights." 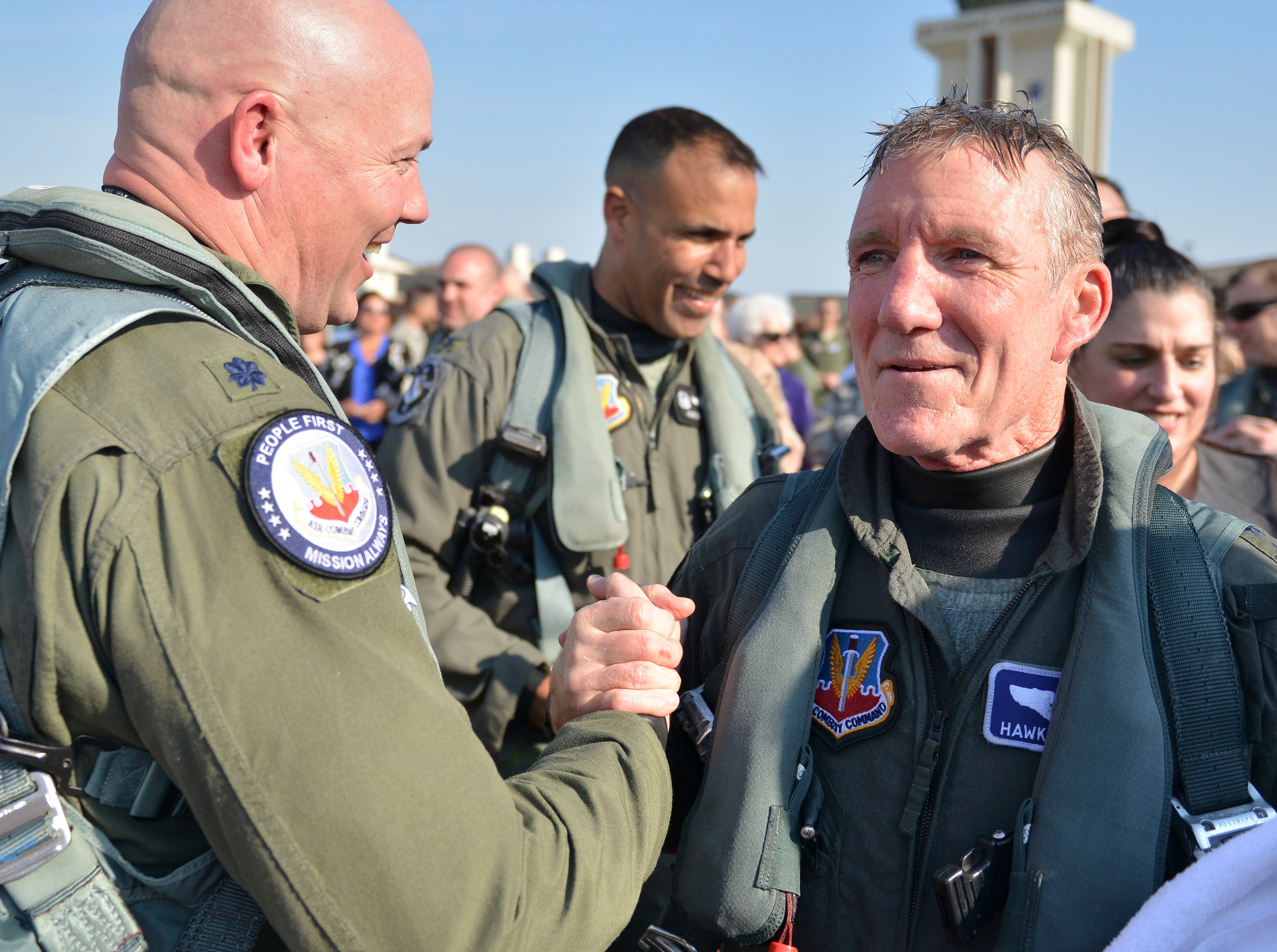 Gen. Hawk Carlisle, head of Air Combat Command, is greeted by airmen, friends and family after his final flight in an F-15 at Joint Base Langley-Eustis on March 9, 2017. Carlisle retired the next day.
Photo Credit: Air Force/Staff Sgt. Natasha Stannard
Holmes received his fourth star on Friday. He was previously deputy chief of staff for strategic plans and requirements at the Air Force's headquarters, and before that was vice commander of Air Education and Training Command at Joint Base San Antonio-Randolph.

Holmes has more than 4,000 flight hours as a command pilot, including more than 500 hours flying the F-15 in combat. As a brigadier general, he served as the commander of the 455th Air Expeditionary Wing at Bagram Air Base in Afghanistan from March 2008 to April 2009. He also served as the principal director for Middle East Policy at the Office of the Undersecretary of Defense for Policy at the Pentagon from July 2009 to August 2011.

Holmes joined the Air Force in 1981 after graduating from the University of Tennessee, and has also led the 27th Fighter Squadron, the 14th Operations Group, and the 4th Fighter Wing.

"There has never been a more important time to serve in uniform," Chief of Staff Gen. Dave Goldfein told ACC airmen in his remarks at the ceremony. "You truly represent the greatest treasure in our nation's arsenal, and I'm honored to serve with you as your 21st chief of staff."

Two charter flights carrying Americans from a cruise ship quarantined in Japan during the coronavirus crisis landed in U.S. at military bases recently. One group was taken to Travis Air Force Base in California and the other went to Lackland Air Force Base in Texas.
Close
Now Playing