When Iraqi forces pushed the Islamic State out of Qayyarah West Airfield in July, the militants left behind an obliterated and unusable runway.

During their two-year occupation of the strategically crucial airfield south of Mosul, ISIS dug trenches in it, tore it up with an excavator-mounted jackhammer, littered it with massive concrete T-walls, and detonated explosives to riddle it with craters. They dumped debris in the holes, and left the airfield booby-trapped with deadly explosives. And they destroyed or severely damaged facilities such as the air traffic control tower.

"They made a mess of it," Brig. Gen. Matthew Isler, deputy commanding general for the Air, Combined Joint Forces Land Component Command of Operation Inherent Resolve and the senior airman in Iraq, said in an Oct. 24 interview. "It was just to destroy stuff."

But after an intense three-week repair effort on the part of 29 airmen, Q-West, as it is informally known to troops, is once again receiving massive C-130 Hercules aircraft. The first C-130, with an aircrew from the 737th Expeditionary Airlift Squadron, conducted a blacked-out landing on the moonless evening of Oct. 21, because the area is still dangerous.

And now, it's becoming a central staging base and logistics hub for the Iraqis as they push to retake Mosul from ISIS.

Resurrecting Q-West has been a complicated effort. It was swept for hidden ISIS bombs six times -- three times by Iraqi forces, and then three more times by coalition forces, so by the time the actual repair effort began, the engineers were safe. The Iraqis also brought in a crane to lift the T-walls off of the runway and reposition them as defensive barriers.

The Air Force brought in its 1st Expeditionary Civil Engineering Group to draw up a plan for how to repair the airfield -- not just the runway itself, but also the dining hall and other living necessities, logistics staging areas, fire support, and air traffic control. And it took some time to bring in the over 200 pieces of heavy equipment -- excavators, mixers, cranes, industrial saws, and specialized runway repair equipment known as "Super Kit" -- as well as supplies such as specialized heavy durability concrete used for runways. 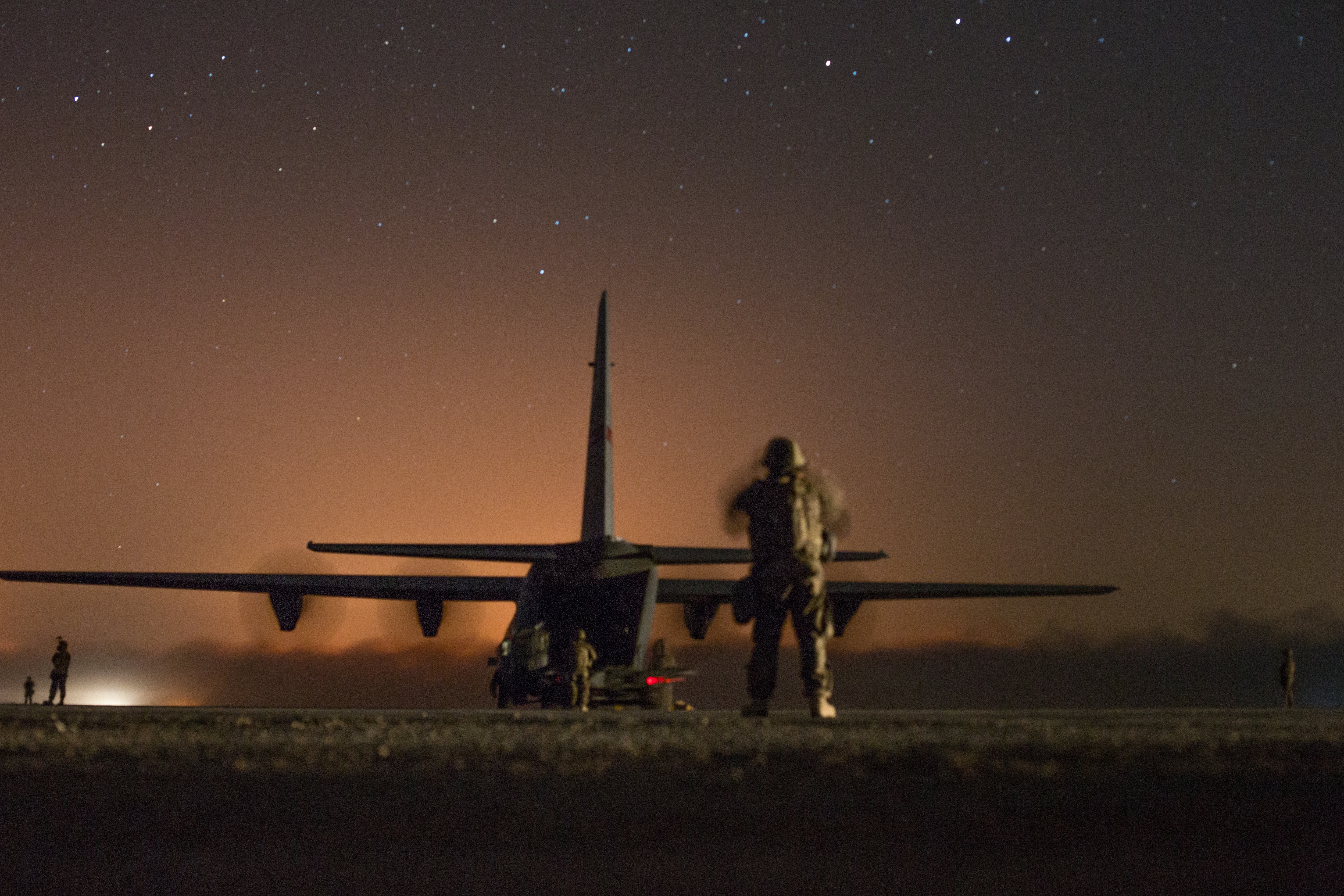 A U.S. Air Force C-130J Super Hercules waits to unload logistical supplies Oct. 22 at Qayyarah West airfield, Iraq, in support of the fight for Mosul. This was the second aircraft to land there following completion of repairs to the runway after Islamic State militants damaged it in an attempt to disrupt Iraqi security forces from gaining control of the area.
Photo Credit: Spc. Christopher Brecht/Army
Once all that was done, Isler said, the 29 airmen started work on Sept. 29. They cleared the trenches of debris, all the way down to the hard surface below, as well as identifying other damaged areas and cut that concrete out as well. They sawed off the edges of the holes to smooth them out. And then they tamped down earth, filled the holes with concrete, and cured it.

And in an Oct. 22 release, Air Force Maj. Jason Stevens of the 1st ECEG said that airmen did their jobs while under the threat of indirect fire from ISIS, such as mortars. As a result, they had to wear full kit and helmets at all times while they worked, Stevens said.

When all was said and done, Isler said the engineers laid nearly 2 million pounds of cement to repair the slightly more than a mile-long runway. The Air Force brought in a special team to inspect and certify the airfield in the morning of the same day the first Hercules landed.

But the shredded runway wasn't the only problem preventing planes from landing. The field's air traffic control also needed to get back up and running. So the Air Force brought in air traffic controllers who were specially trained to open up new airfields to set it up, Isler said. The Air Force also used an elite Joint Terminal Attack Controller to help coordinate airdrops to supply the base, though Isler said the Air Force didn't need to use its combat controller special tactics airmen for this mission.

Now, the Air Force is using Qayyarah West to bring in more ammunition to resupply US and French artillery units that are supporting Iraqi units as they advance on Mosul, as well as numerous other resupplying efforts. Isler declined to comment on how the Iraqis are using the airfield.

And it is likely to continue to be a strategic linchpin during the battles to come over the following months.

"Mosul is really important, ... but the defeat of Da'esh isn't over at Mosul," Isler said, using an alternative nickname for ISIS the group dislikes. "To follow are going to be Tal Afar, al Qaim [ISIS-occupied cities that are, respectively, west and southwest of Mosul], and this, at the invitation of the Iraqis, this gives us incredible flexibility to support their plans and their operations in order to defeat Da'esh."

Secretary of Veterans Affairs Denis McDonough talks about how the VA wants to vaccinate a massive population that includes veterans, their families and caregivers, among others, and outlines how COVID-19 booster shots may be on the horizon.
Close
Now Playing

Bedbugs on a sub and the Army's future vehicles | Defense News Weekly, 3.26.21