The creation of a monument in California honoring U.S. Air Force veterans has begun, but the project is still $50,000 short of the $90,000 price tag, according to a report from television station KRCR in Redding.

The U.S. Air Force Monument is intended to be the first of five service monuments to be built at the Northern California Veterans Cemetery in Igo, southwest of Redding. It will also be the first Air Force monument to be placed at a California state-run veterans’ cemetery.

The monument, titled "Into the Wild Blue Yonder," is intended to honor the sacrifice and dedication of all airmen will be a place of reflection for families and visitors to the cemetery. The design by Vietnam War combat veteran Gideon Carl Turner III, an artist in Redding, has been approved by the California Department of Veterans Affairs. The aluminum monument will be placed along a newly designated monument walkway that will honor veterans of all eras and all branches of service.

Steve Trammell, an Army Vietnam veteran and owner of Eagle Iron Works, a metal fabrication company, and his son, Khay, were chosen to build it.

"I’m flattered that I was picked, and we are proud as punch to have our name on it," he told KCRC.

The 5-foot globe rests on top of a 3-foot pyramid with a 6-foot base. A deltoid-shaped aerospace vehicle will sit on the tip of a contrail that encircles the globe and thrusts upward 4-feet. Trammel told the TV station that the project will require a total of about 300 hours of metal work. It marks the first time in 20 years of business that he will be paid for artwork. 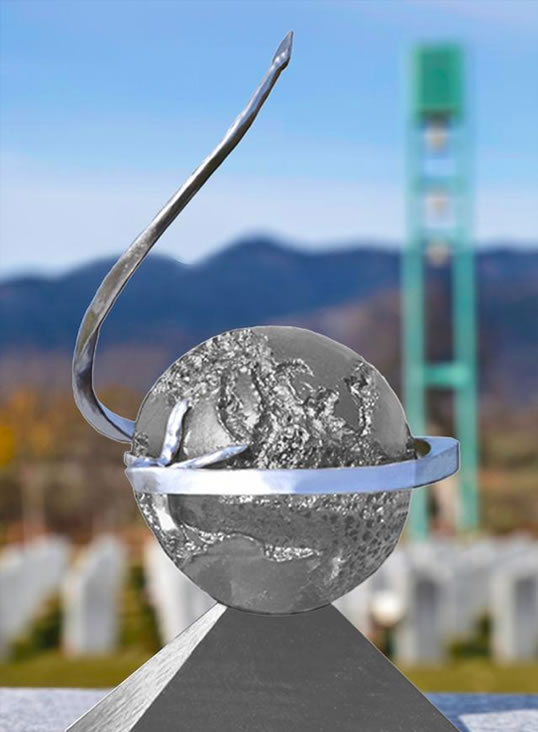 A monument to honor the sacrifices and dedication of all Air Force airmen is being built for display at the Northern California Veterans Cemetery.
Photo Credit: usairforcemonument.com
Organizers hope the monument will be done by late summer and installed by Veteran’s Day. Trammell told the television station that he plans on completing the monument as soon as possible, even if the money is not immediately available.

"It doesn't matter when the money shows up," he said in the report. "The money is important but we have business here already and so it's just a good thing to be working on."

To contribute to the creation of the monument and help the organizers reach their $90,000 goal,  click here.

Rachael Kalinyak is an editorial intern with Network Solutions.

Army Capt. Florent Groberg, Medal of Honor recipient for charging a suicide bomber in Afghanistan, says many of the greatest lessons a person can learn are gained by simply talking to someone about a problem or an issue.
Close
Now Playing