Women in Special Forces: What the US Can Learn From the Afghans

By Robert Stewart and Whitney Dudley
Marines with the 13th Marine Expeditionary Unit female engagement team detachment, escort a role-player during a training exercise at the infantry immersion trainer at Camp Pendleton, Calif., April 29. The 13th MEU is preparing for their upcoming deployment by immersing Marines in scenario-based training exercises to enhance and test their ability to work together and accomplish an assigned mission.

Editor's note: The following is an opinion piece. The writers are not employed by Military Times and the views expressed here do not necessarily represent those of Military Times or its editorial staff.

By any measure, the number of women serving in the Afghan Special Security Forces is small — 80 women out of some 14,000 personnel. But while many are relegated to support roles, about 20 of the women are employed as members of the tactical platoons and counterintelligence units integral to the effectiveness of the special security forces. Despite their limited numbers, the women play an important part in the counterterrorism and counternarcotic capabilities of these forces.

Engaging with the female civilian population was a consistent challenge that U.S. and coalition special operations forces faced in Afghanistan. Their mission often required them to function in some of Afghanistan’s most culturally conservative, rural areas. One approach used to mitigate this challenge was developing female-only coalition units to support male-dominated U.S. and NATO tactical forces that include the Army and Marine female engagement teams and cultural support teams.

While the effectiveness of these ad hoc coalition units — which did not have the time to develop the necessary cultural, linguistic and other skills they needed to succeed — has been debated within NATO and Department of Defense circles, the women-only units in the Afghan Special Security Forces have been highly effective. The female platoons in Afghanistan increase the effectiveness of the forces by engaging directly — when necessary and in a culturally appropriate manner — with women in the vicinity of special forces operations.

Lance Cpl. Sarah Dixon, a motor transportation mechanic with the 13th Marine Expeditionary Unit female engagement team detachment, escorts a role-player during a training exercise at Camp Pendleton, Calif., in 2013. The Corps is sending female engagement teams with its Marine expeditionary units because they can perform vital functions, like searching, interrogating or even training women where men and women mix because of cultural taboos. (Photo: Cpl. Joshua Young/Marine Corps)

As a consequence of Afghanistan’s well-established gender norms, which dictate women should not be in contact with men outside of their family, the women’s role in the security sector is "gendered." That means female tactical teams are designed to respect the male/female societal division and only culturally appropriate people are allowed to engage with women and children during special security forces tactical operations. Male-only units conducting raids on the homes of suspected terrorists are not culturally allowed to conduct physical searches on women in the household, which has become an increasingly significant problem since more male suspects are attempting to evade capture by dressing as women. The female members of the special forces also interrogate the women present during an operation, augmenting intelligence-gathering capabilities.

The contributions of the women in Afghanistan’s special security forces demonstrate the unique value that women can bring to special operations forces in socially conservative societies like Afghanistan. Yet the role of women within the ranks of the Afghan Special Security Forces is far less recognized, both in Afghanistan and within the international community, than the forces themselves. Typically, the government of the Islamic Republic of Afghanistan turns to its special security forces first when responding to challenging security situations. The special security forces were the government’s go-to force when the northern city of Kunduz was overrun in late September, and they are deployed throughout the country when conventional forces are overextended. 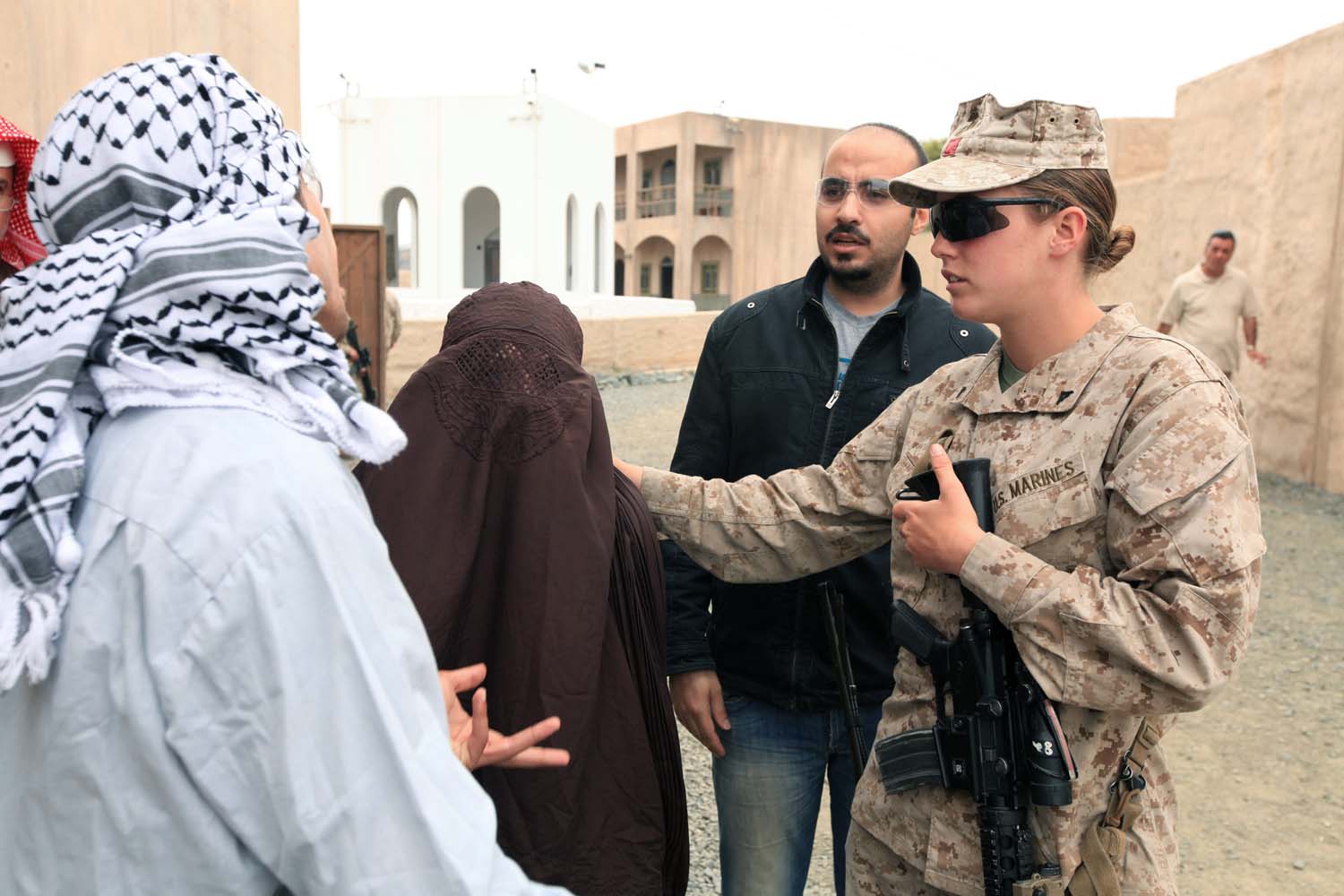 Lance Cpl. Sarah Dixon, a motor transportation mechanic with the 13th Marine Expeditionary Unit female engagement team detachment, escorts a role-player during a training exercise at Camp Pendleton, Calif., in 2013. The Corps is sending female engagement teams with its Marine expeditionary units because they can perform vital functions, like searching, interrogating or even training women where men and women mix because of cultural taboos.
Photo Credit: Cpl. Joshua Young/Marine Corps
Our assessment draws on our research in Afghanistan and conversations with several NATO representatives known as "gender advisers," whose mission is to improve the working conditions of women in the Afghan security forces. One gender adviser told us that the female members of the special security forces were "very successful" in these tactical roles and that they have been essential in operations requiring interaction with the community. Despite cultural barriers hindering women from joining the forces, those in the special security forces are well-trained for their particular mission and valued by the Afghan Special Security Forces, several of the advisers said.

The major challenge the Afghan Special Security Forces confronts in expanding the number of women in its ranks is the ability to recruit qualified personnel. It must rely on the Afghan National Defense and Security Forces' centralized recruiting and personnel allocation process to identify the right women for a particular mission. Other challenges, such as the lack of sufficient women-specific physical infrastructure (including bathrooms and barracks) and gender-based discrimination and harassment, are being actively addressed by the Afghan forces with the support of coalition gender advisers.

Last October, President Obama ordered U.S. special operations troops to deploy to Syria and operate in culturally conservative, remote areas to fight ISIS in Iraq and Syria. Cultural norms in villages, towns and refugee camps within Iraq and Syria will create a challenging environment for male special operations troops to interview, interrogate or partner with women to support operations. However, the recent decision to fully integrate women into U.S. special operations forces offers an opportunity for the United States to learn from its experiences in Afghanistan, since integrating women with cultural and linguistic fluency into those teams has proved to be a powerful enabler to coalition efforts in the latter years of the Afghanistan campaign.

The Department of Defense could benefit from developing and instituting approaches that would allow special operations forces to work with women in these culturally conservative societies, according to Rand research published last year. Properly planning and implementing gender integration would minimize complications and enhance the mission of U.S. Special Operations Forces.

Whitney Dudley is a researcher at the nonprofit, nonpartisan Rand Corporation and Robert Stewart is a former Rand researcher.  They spent time with the Commander’s Action Group of the NATO Special Operations Component Command-Afghanistan from April 2015 through January 2016.