Air Force general: ISIS to be driven out of Mosul 'within days'

The liberation of Mosul from an increasingly cornered Islamic State is expected to be complete "within days," the top Air Force general in Iraq said Friday.

In an interview with Air Force Times, Brig. Gen. Andrew Croft, deputy commanding general for Air, Combined Joint Forces Land Component Command, Operation Inherent Resolve, said that a few hundred ISIS fighters are left in a single small pocket in West Mosul that is less than a square kilometer in size — "smaller than the little [forward operating base] I live on."

And that pocket is steadily collapsing day by day, he said, as the Iraqi Security Forces grind out another 50 or 100 meters or so at a time.

ISIS is backed up against the Tigris River to its east, Croft said, and Iraqi Security Forces are squeezing them from the north, south and west, forcing them to defend attacks from multiple directions. Those attacks are supported by airstrikes from U.S. and other coalition aircraft, requested by Iraqis to target ISIS snipers or defensive fighting positions. Once those positions are taken out, he said, Iraqi troops can again move forward.

The Iraqis "are doing a heroic job" waging the grueling, nearly nine-month-old Mosul battle — the kind of fight that hasn't been seen since World War II, Croft said. They're fighting in 115- to 120-degree weather, in a city the size of Philadelphia that started with 1.8 million people in it, and are getting the job done while displaying extraordinary bravery, he said.

"The fight in Mosul would challenge the best military in the world," Croft said. "It's like Stalingrad, but it's 10 times worse. It's a battle where we do everything that we can to try and kill an enemy that's trying to surround themselves by civilians that we're trying to protect. We've not seen it in 70 years or more. There's been some stories of Iraqi heroism ... there would probably be 10 or 20 Medals of Honor out of this thing if it was us doing it, and a lot of it goes unheralded." 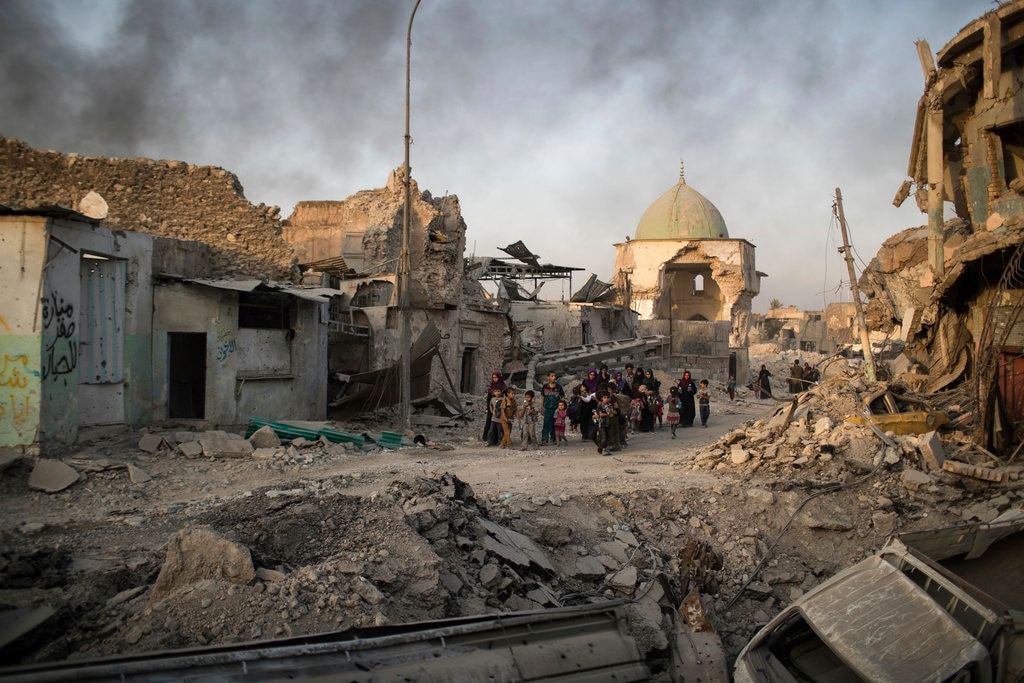 Fleeing Iraqi civilians walk past the heavily damaged al-Nuri mosque as smoke rises in the background in the Old City of Mosul, Iraq, July 4, 2017. As Iraqi forces continued to advance on the last few hundred square kilometers of Mosul held by the Islamic State group, the country's prime minister said the gains show Iraqis reject terrorism.
Photo Credit: Felipe Dana/AP
The coalition always uses precision-guided munitions to make sure it hits the right targets, but as the battlefield shrinks, the risk of airstrikes accidentally injuring or killing civilians or Iraqi allies increases. And to try to lessen that risk and become more precise with its airstrikes, Croft said, the coalition is tweaking its guided weapons — usually the 500-pound GBU-38 bomb — to load them with the smallest amount of explosives it can.

Typically, Croft said, the amount of explosive packed into such weapons amounts to a little less than half of its weight. But for these lightweight, so-called "low-collateral" weapons, the coalition is cutting that amount to about 10 percent of the weapon's weight, so the detonation is proportional to the amount of damage it seeks to cause — and avoid.

For example, Croft said, if civilians are in basements or being held against their will by ISIS, the low-collateral weapons can make it easier to kill ISIS fighters and not the civilians.

"They've always been precise, but now that precision is even more important," Croft said. "It doesn't cause excessive damage to structures, it doesn't threaten people that are fairly close" to the target.

And as airstrikes are called in, it's also increasingly important to coordinate with the Iraqis as they close in on ISIS positions, Croft said. ISIS fighters also sometimes wear civilian clothes or Iraqi uniforms, he said making it even harder to avoid civilian or allied casualties.

Croft said the plan is to continue the current pace of operations until the last ISIS fighters have been routed. Coalition advisers are on the ground, coordinating with various Iraqi forces like the Iraqi army and the Counter-Terrorism Service, and those efforts are synchronized with the air support Croft oversees.

Intelligence, surveillance and reconnaissance aircraft such as the MQ-1 Predator and MQ-9 Reaper drones are constantly patrolling overhead, providing continuous full-motion video, he said. And airstrikes are being conducted by Air Force B-52s, F-15s, F-16s, and A-10s, as well as Navy F/A-18s and allied aircraft such as British Tornados and French Rafale fighters.

The Predators and Reapers also sometimes armed, Croft said, but arming them limits the amount of time they can loiter over the battlefield to conduct surveillance. The coalition is largely "platform agnostic," he said, since most airplanes can carry most of the weapons used in this fight.

"As long as we continue that, at the pace we're at, this thing will end predictably," Croft said.

Iraqi children flee through the rubble as Iraqi forces continue their advance against Islamic State militants in the Old City of Mosul, Iraq, July 4, 2017.

ISIS has conducted some counterattacks that have pushed Iraqi forces back a few hundred meters, he said. But those counterattacks have ultimately been unsuccessful, he said — ISF troops quickly stage their own counterattack and regain the territory.

The battlefield is extremely complicated, Croft said, especially when trying to lessen the risk to civilians. Iraqi troops fighting in the narrow streets and alleys of the old part of the city are facing snipers, suicide bombers, and improvised explosive devices hidden in buildings and stationary cars. The Counter-Terrorism Service once cleared six IEDs from a single booby-trapped house, he said.

ISIS fighters are sometimes rigged with suicide vests, Croft said, and as a last-ditch effort, will rush anyone they can find to blow themselves up — even crowds of civilians.

"It's not block by block. It's literally building by building and alleyway by alleyway," Croft said.

Croft expects that ISIS won't have a coordinated defense in the last phase of the fighting, but instead will be separated into even smaller pockets of individual fighters. And when the Iraqis clear out those last few fighting positions, Croft predicted, "suddenly it'll just stop [and] go quiet."

The coalition is planning to wait for the Iraqi government to officially announce the liberation of Mosul, Croft said. But even after ISIS is gone, the Iraqi army's work won't be finished, he said. They will still have to conduct security operations in the western half of the city and keep improving its stability, just as they do in the eastern half, which was liberated in January.

And after the Mosul battle is done, Croft said, "we go where the Iraqis go," since the Iraqi government decides how it wants to move forward in its war against ISIS and the coalition provides support. It's hard to tell how ISIS will respond after losing Mosul, Croft said, but the large amount of foreign fighters in its ranks will not easily disappear into local populations.

The coalition will continue training Iraqi forces through the Building Partner Capacity process so they can better secure Iraq, he said, and also prevent an insurgency from erupting.