After the steepest drawdown in two decades, the Air Force is trying to pull out of its manning nosedive.

And to do that, it’s changing the way it recruits.

The Air Force is now in the middle of a massive overhaul of how it finds young Americans to be the next generation of airmen, convinces them to sign up, and brings them on board.

And at this point, the service can’t afford to do stupid, inefficient things. Not only are Air Force recruiters undermanned and stretched thinner than any other branch of the military, but recruiting is more important than ever as the service tries to rebuild its end strength.

That’s a roughly 6 percent drop — the biggest two-year cut since the post-Cold War drawdown of the early 1990s, when the service shrank by 10 percent.

"Across the board, we’ve been trying to grow everywhere," Brig. Gen. Brian Kelly, director of military force management policy, said in a May 22 interview.

This includes offering retention bonuses worth up to $35,000 a year to pilots and selective re-enlistment bonuses for enlistmed airmen worth up to $90,000.

And the Air Force still has  crucial and undermanned areas it is particularly focused on — maintenance; cyber; intelligence, surveillance and reconnaissance; and nuclear.

When combined, the growth in those four areas will likely account for about 3,315 of the overall 4,700-airman growth expected this year — or 70 percent. 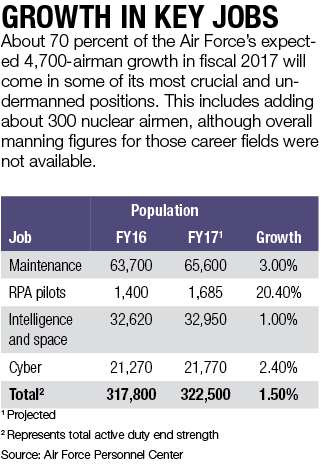 But another major factor is a renewed push to recruit more airmen. And the Air Force knows that it can’t do that without making the lives of its recruiters better.

"Everything we do needs to be focused on that recruiter in Kenosha, Wisconsin, to make sure that that recruiter’s job is as easy as possible," Harencak said.

Across the military, Air Force recruiters are by far the most overworked.

Harencak said his recruiters bring in more than 2.5 new recruits per month, on average — "historically high for us in the Air Force."

Army recruiters, on the other hand, typically bring in 0.8 new recruits a month, Marine and Navy recruiters have a monthly average of 0.9, and Coast Guard recruiters bring in 1 recruit each month.

An Air Force Manpower Agency study last year found that the average recruiter works about 38 hours more per month than the average 200-hour work month, he said, though some recruiters in 2014 reported even longer work weeks to Air  Force Times.

To fix that, Air Force recruiting is working hard to reverse its own downsizing and undermanning, growing by 24 percent over the past two years to get to 1,191 recruiters.

Harencak said the Air Force needs to add another 200 to 300 recruiters in the coming years to get it where it needs to be, including the roughly 120 recruiters expected to be added this year.

Adding 300 more recruiters should get the average per-recruiter monthly production down to about 1.5, he said. That would be a better average than it is now, but still higher than any other service.

It also would allow the Air Force to bring in about 33,000 enlisted airmen per year, he said. Last year — in the best recruitment year since the Vietnam era — the Air Force brought in 31,732 enlisted, including 225 prior-service airmen.

But even that might not be enough. If the Air Force gets aggressive with its growth and decides it wants to get to 350,000 airmen in the next few years, that could require bringing in 35,000 enlisted each year, said Mike Romero, director of staff at AFRS.

The Air Force said in December it hoped to get up to 350,000 airmen by about 2024 to help fill critical manning gaps. However, Heather Wilson, the new Air Force secretary, said on June 5 that she wants to wait until a review of the nation’s national security strategy is completed before making any decisions on the service’s force structure and manning levels in future years.

The Air Force is also dropping outdated policies that tangled recruiters in red tape and kept out people who could have become good airmen.

When the Air Force was downsizing, the pressures to recruit weren’t as bad, and the Air Force could instead focus on reducing or eliminating the risk of admitting the wrong people.

The Air Force doesn’t have that luxury anymore, Harencak said, and its recruiting mentality has to change.

"We have a system where all we do is build barriers and obstacles for great young Americans to join our Air Force," Harencak said. "We want to change the focus, to build bridges and pathways to get deserving young Americans."

In January, the Air Force dropped its rules barring recruits with more than 25 percent of their chest, back, arms or legs tattooed, and loosened rules on past marijuana use that disqualified some potential recruits.

"The tattoo policy was very restrictive, and it wasn’t in line with the other services," Harencak said. "We lost thousands of otherwise qualified applicants due to our policy on ink."

The Air Force also reconsidered its policies on medical issues such as eczema, ADHD and asthma.

"So many times, kids are diagnosed with childhood asthma," Harencak said. "Now, we’re actually checking to see if they have asthma, as opposed to saying, ‘Sorry, when you were 11 years old somebody wrote that you might have asthma, and that disqualifies you from joining the Air Force.’"

All those issues placed a "tremendous burden" on recruiters, Harencak said.

The processes required to get recruits waivers, take them to doctor visits, and shuttle them back and forth to the military entrance and processing station, or MEPS, to get them cleared required "reams and reams" of paperwork and ate up tremendous amounts of time that recruiters could have better spent trying to find more new recruits, he said.

The strict requirements also led some recruiters to break rules. Some told Air Force Times in 2014 that they knew of other recruiters who urged potential recruits to cover up minor medical conditions such as ADHD and asthma to avoid having to get a waiver, which could add several weeks to the process — time during which recruits could get cold feet and drop out.

Harencak said AFRS realized it had built a burdensome system that required nearly all waivers to come to its headquarters at Joint Base San Antonio-Randolph in Texas for approval. Now, almost all waivers have been pushed down to the lowest practical level, he said, and the Air Force continues to work on lowering the approval requirements for the remaining waivers.

Maj. Tyler Ellison, an Air Force Thunderbirds pilot, administers the oath of enlistment to a group of airmen at an air show in Florida.

Harencak said AFRS is continuing to look for more steps and paperwork to take out of the process. For example, he said, the Air Force has scrapped a three-page form recruiters used to have to fill out describing each recruit’s tattoos.

Almost every week, 800 young people show up at basic training with a large manila envelope containing 36 pieces of paper.

After they arrive, those documents are checked, uploaded to various systems, and shredded within two weeks.

The Air Force eventually wants applicants to digitally enter their own information on their home computer or on a tablet in the recruiting station, instead of recruiters having to spend time manually inputting information. The goal is for its first squadrons to take that step by the end of this year.

Harencak envisions a future where all a new recruit has to bring to basic training is a picture identification and, perhaps, a single paper copy of his orders — though Harencak wouldn’t mind scrapping the  hard copy of orders, too.

This, he said, would free up two to four hours per applicant for recruiters.

"We’ve been using self-correcting software to buy our airline tickets, to be on Amazon.com, on all these things … for years," Harencak said. "We need it in recruiting, to allow us to have a totally paperless experience. Not only will it save a lot of time, but we count ourselves as the most technologically advanced service, and yet we’re probably the one who’s the furthest behind in using technology in our recruiting process. All that’s going to change."

Harencak also said the Air Force’s marketing budget has been too low, which hurt its ability to push its brand and promote itself to potential recruits. That’s being fixed, he said, and recruiting is getting the additional funds necessary to get its message out.

The Air Force also is starting to re-open recruiting offices that it closed in recent years because money was tight and they weren’t seen as cost-efficient.

During that contraction, the Air Force even pulled out of some major cities, such as Detroit, but it’s now moving back. It is also opening new offices in the Northeast, expanding in the Southeast, and re-opening an old office in northern New Jersey, he said.

Harencak said all recruiting squadrons have been challenged to reopen an old office or open a new one this year.

"When we consolidated, we saw a drop-off in production," Harencak said. "That drop-off was expected when we closed it, and we felt like that was an acceptable loss that we’d be able to make up in other ways. Now that we’re producing high, we cannot afford to leave zones uncovered."

The service is also opening offices in Germany and Italy, he said. Air Force recruiting has been gone so long there that they are essentially brand new offices.

And it’s looking to open or re-open offices in territories like the Virgin Islands, Guam and Puerto Rico. He said recruiters tend to do well abroad, recruiting expats, children of Defense Department civilians and service members, and dual-citizens in places like the Philippines and American Samoa.

"If we’re going to have these consistently higher goals, we have to get back into Detroit," Harencak said. "We have to open and revitalize our overseas locations. Just a few years ago, it made perfect sense to consolidate and bring people into what we call hubs, and we left zones. Now it’s totally different, so we’re going back."

When offices were consolidated into hubs, some recruiters — especially those in rural areas — objected because suddenly they had a massive area to cover.

These recruiters regularly spent hours upon hours on the road, trying to reach a high school in hopes of convincing just one kid to sign up. Hopefully, Harencak said, the new offices will help.

"Right now, they are spread too thin," he said. "There’s just no escaping it. When you see recruiters that have hundreds of thousands of square miles [to cover], and a high school that’s nine hours away in good traveling weather, that’s not acceptable to me. We’re asking too much of them. They’re working too hard."

The $858 billion measure also includes a 4.6% pay raise for troops next year and plans to backfill munition stockpiles depleted by the war in Ukraine.

Two studies that looked how the new missions could affect the environment at Robins found they would have “no significant impact."

The Afghan Adjustment Act would allow Afghans who came to the U.S. during the Afghanistan evacuation to be re-vetted and apply for a permanent status.

Gallery: See the planes on display before the B-21 rollout

The Advancing Aeronautics Expo before the B-21 rollout was a display of aviation history, all the way back to the Doolittle Raiders of World War II.

Gallery: See the planes on display before the B-21 rollout