The medical staff at the David Grant Air Force Medical Center at Travis Air Force Base, California, is testing a new advanced birth simulator. Travis is one of five installations across the Defense Department to be selected by the Defense Health Agency as a pilot base for the new system.

The capabilities of the new Complicated Obstetrics Emergency Simulator will enhance the quality of analysis and feedback available from the training sessions for the medical staff, according to an Air Force Press Release. 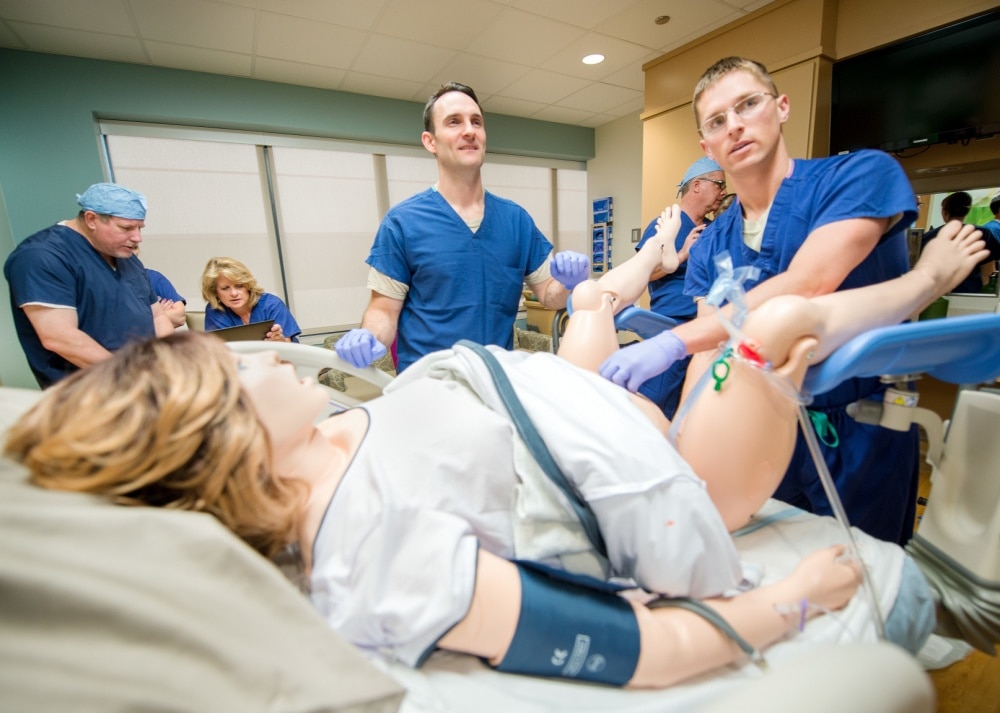 Medical staff conduct training on the new Complicated OB Emergency Simulator. The system provides a standardized platform to train all levels of clinical staff, promoting standardization of care and patient safety. Air Force photo by Louis Briscese
"The computer instantly gathers data on how we work as a team and sends that information to the Air Force Medical Operations Agency and [the Defense Health Agency]," said Capt. Tamara Grimaud, the Medical Child Flight commander and a clinical nurse specialist with the 60th Inpatient Squadron. The capability to provide automatic reports and updates allow for the standardization of both training and patient safety.

Evaluators get to see which providers are doing what tasks, as they are doing them, she added. They also get an immediate after-action report.

The simulator provides a level of training that just wasn't possible under the old system, known as the Mobile Obstetric Emergency Simulator, said Lt. Col. Barton Staat, the Air Force Surgeon General consultant for obstetrics and maternal-fetal medicine, according to the release.

The staff at the Maternal Child Flight have been at the forefront of advanced obstetrics training, even developing an improved algorithm that helps newborns breathe after delivery.

"Most of the patients we see at this facility are low risk, [but] occasionally you have an emergency," said Capt. Danielle Siler, an element leader with the 60th IPTS, "those are the ones we practice for."

Rachael Kalinyak is an editorial intern with Network Solutions.

The Spouse Angle Podcast: Why Military Teens ‘Are Not Okay’

Many military teens struggle with food insecurity and mental health. Yet a large percentage plan to one day don the uniform, a new study shows.

“We are incorporating the DNA of the EC-130H — not just the DNA, we’re doing organ transplants," an L3Harris executive said.

The latest evaluation “will delve deeper into some of the items we learned in the first project," officials said.

A former Navy Seabee explains how the service gave him the tools to form a non-profit.

The Taliban have promised plots of land to relatives of suicide bombers who attacked U.S. and Afghan soldiers, in a provocative gesture that seems to run counter to their efforts to court international support.

El Salvador has the potential to be the Soviet Union’s Cuba.