Growing readiness woes: Only 7 in 10 Air Force planes are ready to fly

On March 22, as North Korean dictator Kim Jong Un prepared to test-launch a missile and tensions rose on the volatile Korean peninsula, a lone B-1B Lancer bomber took off from Andersen Air Force Base in Guam and flew across the Pacific on a Continuous Bomber Presence sortie.

It rendezvoused with Japanese F-15J Eagles for a training mission, before flying on to South Korea to further train with their F-15Ks and F-16s.

But there were supposed to be two B-1Bs there that day. The second bomber that was "scheduled to respond to a clear and present danger in North Korea," as Rep. Joe Wilson, R-S.C., said in a hearing later that day, was unable to take off. Pacific Air Forces later said a maintenance issue kept the second Lancer on the ground.

It’s not only B-1Bs having readiness problems. On any given day, according to official statistics, nearly three out of every 10 aircraft in the Air Force’s aging fleet are out of commission — in the shop getting upgrades, undergoing regular maintenance or inspections, or receiving heavier-duty repair work.

And the problem is getting worse. Mission-capable rates — the metric by which the Air Force measures how much of its fleet can fight or fly other missions at any given time — are trending downward, slowly but steadily.

In fiscal 2014, mission-capable rates for all of the Air Force’s airplanes and helicopters were just shy of 74 percent.

The decline in readiness is accompanied — and partly caused — by the increasing age of the Air Force’s fleet. The average aircraft age has spiked in recent years, from roughly 24 years in fiscal 2010 to 27 years in 2016.

"Our highest investment priority is in improving readiness," acting Air Force Secretary Lisa Disbrow said March 3 at the Air Force Association’s Air Warfare Symposium in Orlando, Florida. "The aircraft we have on the ramp are too old. We need to revitalize the fleet."

The fluctuations in mission-capable rates are hitting different air frames differently, and not all are dropping — indeed, some have shown improvement. But overall, especially in some of the Air Force’s most crucial aircraft, readiness is continuing to fall or remaining at concerningly low levels. 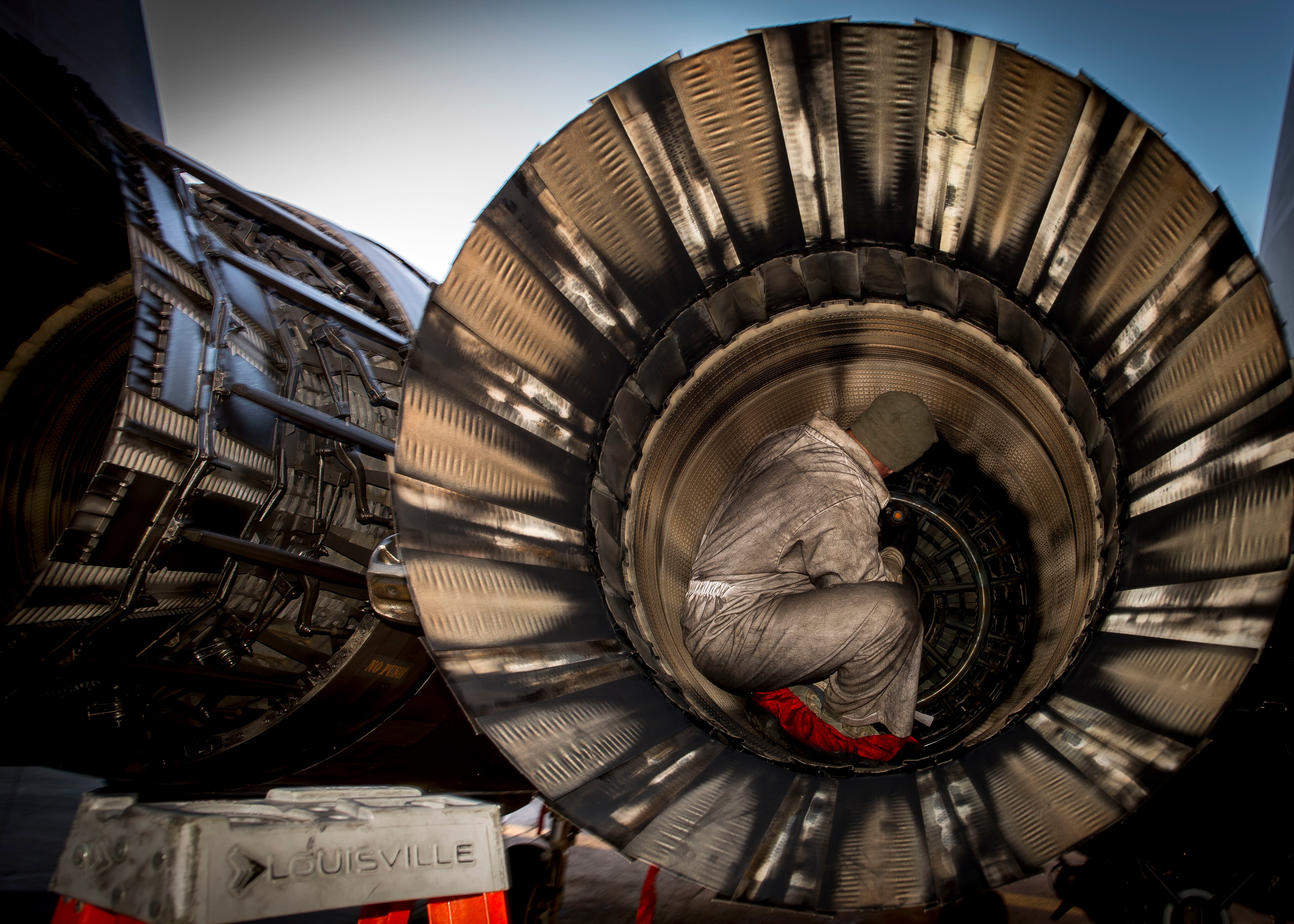 Staff Sgt. Shane Dewyar of the 332nd Expeditionary Maintenance Squadron, inspects an engine while deployed to Southwest Asia.
Photo Credit: Staff Sgt. Eboni Reams/Air Force
Mission-capable rates for the Air Force’s B-2 Spirit bombers dropped from 56 percent to 51 percent over that time, while the B-1 Lancer rates increased from 47 percent to not quite 52 percent. Despite the improvement, on average, about half of the Air Force’s B-1s and B-2s are grounded.

(The venerable B-52 Stratofortress fleet — at an average age of 54 years, one of the service’s oldest — is doing the best of all Air Force bombers, with 74 percent flyable at any given time.)

"It forces us to prioritize the real-world missions over … our training and readiness requirements," Hawkins said. "When the mission-capable rates are lower … it affects the long-term readiness of our fleets, our ability to train our air crews, and it has a ripple effect that can take years to fix."

"Each percentage change is a reduction in capability," Hawkins said. "A [hypothetical] 5 percentage [point] change in the C-17 MC rate comes out to be approximately 10 aircraft. And when you look at the work measured by million-ton miles per day, that's cargo-carrying capacity that's reduced across the board when we see something as small as a 5 percent change in mission capable rates."

C-17 rates have remained largely unchanged, at about 85 percent.

In most cases, aircraft are brought to the depot at pre-planned intervals — usually about every 400 flight hours for most platforms — for expected maintenance and to look for hidden problems.

"Just like in our cars, if you get the check engine light on the dashboard and take it into the dealership, they do what the manual calls for," Lawrence said. "We do the same with airplanes."

When it can, the Air Force also tries to conduct planned upgrades to aircraft while they're already looking under the hood, so to speak.

For example, Lawrence said, two of the Air Force's 20 B-2A Spirit bombers are now in programmed depot maintenance, and two others are getting modifications. Additional B-2s might need inspections or other repairs, which contributed to the bomber's slide in mission-capable rates last year.

But even with B-2s in the shop for one reason or another, the Air Force still needs those bombers to fly training sorties at home and support security packages around the world. For example, two B-2s flew a 34-hour mission in January from Whiteman Air Force Base in Missouri to Libya, where they led a strike against an Islamic State training camp near Sirte.

However, flying such a small fleet of advanced bombers so heavily can lead to further problems, Lawrence said.

"When you start to fly the same aircraft over and over and over again, the possibility of having some second- and third-order effects, when an aircraft breaks and you're not able to fix it, begin to manifest themselves," Lawrence said.

Some of the Air Force's newest and most advanced fighter jets are experiencing problems of their own that keep them from flying.

The F-22A Raptor is having problems with its low-observable, or stealth, coating, Lawrence said.

"In high flow areas, what's essentially happening is there's a gradual deterioration of the [stealth] coatings, and they begin to liquefy on the surface," he said. "So if the [low-observable] coatings aren't doing what we need them to do, then the platform loses its ability to do its primary mission, which is get behind enemy lines without detection."

This means airmen have to spend more time re-applying the stealth coating on the Raptor, which means less time in the air. The F-35A Lightning II has similar issues with its stealth coating, he said, but not to the same degree as the F-22.

The F-22 is also having issues with its spare parts inventory, Lawrence said. The Air Force conducted modeling on the Raptor to try to predict which parts would break first, to make sure depots had plenty of spares on hand.

But other parts — particularly avionics components and relay parts — started to break earlier than expected, Lawrence said. And because the Air Force hadn't predicted an increased need for them, it's been running out, further delaying some Raptors' return to the air.

The Air Force also grounded 13 of its 96 F-35s last year after discovering insulation on coolant tubes was peeling and crumbling, which left potentially damaging residue in the fighter's fuel. Those planes resumed flying after two months of repairs.

"That was probably the biggest issue that impacted the F-35," Lawrence said.

Hawkins said the age of some of AMC's veteran aircraft are causing supply chain issues of their own. Some AMC planes, such as the average 54-year-old KC-135 tanker, rely on parts made by companies that have either gone out of business or stopped making those parts years ago. For example, the KC-135 is based on a Boeing 707 platform, and the last 707 rolled off the line in 1991.

Airmen from the 25th Aircraft Maintenance Unit load munitions onto an A-1o Thunderbolt II during an exercise in South Korea. The Air Force's aging A-10 fleet has seen a decline in readiness over the last year.

But it wasn't always huge contractors who stopped producing parts. The Air Force relied on many small businesses for little structural parts such as specialized screws, brackets, and landing gear components, Hawkins said.

"A lot of those mom and pop outfits have gone on or merged with other businesses," Hawkins said. "We can't go to those same small businesses to replenish the supply chain as we use these parts on aircraft that continue to age."

AMC can either go back to those companies and convince them to dust off their plans and tools and restart production on those parts — at a high cost to the Air Force — or Air Force depots have to fabricate parts on their own.

Lawrence said an aircraft mission-capable rate decline of 5 percent is typically within the Air Force's control limit, but swings of more than 5 percent in a single year are particularly concerning.

The HH-60G Pave Hawk helicopter, for example, dropped from 76.9 percent to about 67.2 percent — nearly 10 percentage points in a single year. That's concerning, he said, and is partly due to the Pave Hawk's deployment rates.

It's also due to functional check flights and "hover checks" — carefully making sure a helicopter can safely hover above the ground before attempting a full flight — that have to be performed after a thorough Pave Hawk inspection that requires taking it apart completely before putting it back together, he said. Aging Pave Hawks — which are 25.8 years old on average — also require more inspections, he said.

Lawrence said the Air Force looks at how aircraft's age is affecting readiness on nearly a daily basis.

Besides affecting the number of aircraft available to fly at any given time, Lawrence said aircraft age also increases the number of maintenance man-hours required for each flying hour.

Or, in other words, older planes need more love.

"In a force where we are trying to rebuild readiness, that is a challenge," Lawrence said.

Hawkins also said aircraft age, as well as high operations tempos over the more than 16 years since 9/11, is having an effect on aircraft readiness.

And the Air Force's severe shortage of experienced maintenance airmen has also put aircraft readiness further behind. The Air Force has made eliminating that shortfall by the end of fiscal 2019 a priority.

"It has an impact," Lawrence said of the shortage. "There's no question that it does. If one were to take their car to the dealership and recognize that there were five cars and only four technicians to work on them, a car wouldn't get worked on. The same principle applies to aircraft maintenance. So we work very hard to make sure every aircraft gets its just attention each and every day."

China balloon: Many questions about suspected spy in the sky

The massive white orb that drifted across U.S. airspace and was shot down by the military triggered a diplomatic maelstrom and blown up on social media.

An undisclosed number of V-22 Ospreys across three services will halt operations until a component tied to the engine is replaced.

US downs Chinese balloon, a flashpoint in US-China tensions

Biden said he wanted the balloon downed on Wednesday, but was advised the best time for the operation would be when it was over water.

“The Covenant” arrives in theaters in April.

US downs Chinese balloon, a flashpoint in US-China tensions