The drawdown blew a hole in the Air Force’s maintenance ranks. How it's digging its way out.

Before the steep force management cuts of 2014 hit the Air Force’s ranks, maintainers at Shaw Air Force Base in South Carolina — home of the 20th Fighter Wing and its roughly 79 F-16CM Fighting Falcons — worked about 40 to 50 hours a week.

It was tough work, and they were often on call during weekends, but it was doable.

These days, short-staffed Shaw maintainers often work 12-hour-plus days, 60 hours a week, and they come in on weekends at least twice a month. Many are fed up with the stress, the long hours, and the extra duties — such as physical fitness training and professional military education — taking up time that could otherwise be spent with their families.

And, increasingly, they’re seeing their fellow airmen hang up their wrenches once and for all.

"There comes a point where people stop and say it isn’t worth it anymore," said Staff Sgt. Stephen Lamb, an avionics craftsman from the 20th Aircraft Maintenance Squadron at Shaw. "I’ve seen, in the past few years, a lot of good friends walk out the door."

The Air Force has long known its maintainer shortage is a serious problem, affecting aircraft readiness and burning out personnel. The service has been trying to fix the shortfall for years — with some success — but the 2014 drawdown dug a deep hole, and work remains for the service to climb its way out.

All this as the service remains busy at home and overseas — supporting missions in Iraq, Afghanistan and around the world — and struggles with an aging fleet that requires a lot more care and work to keep in the air. 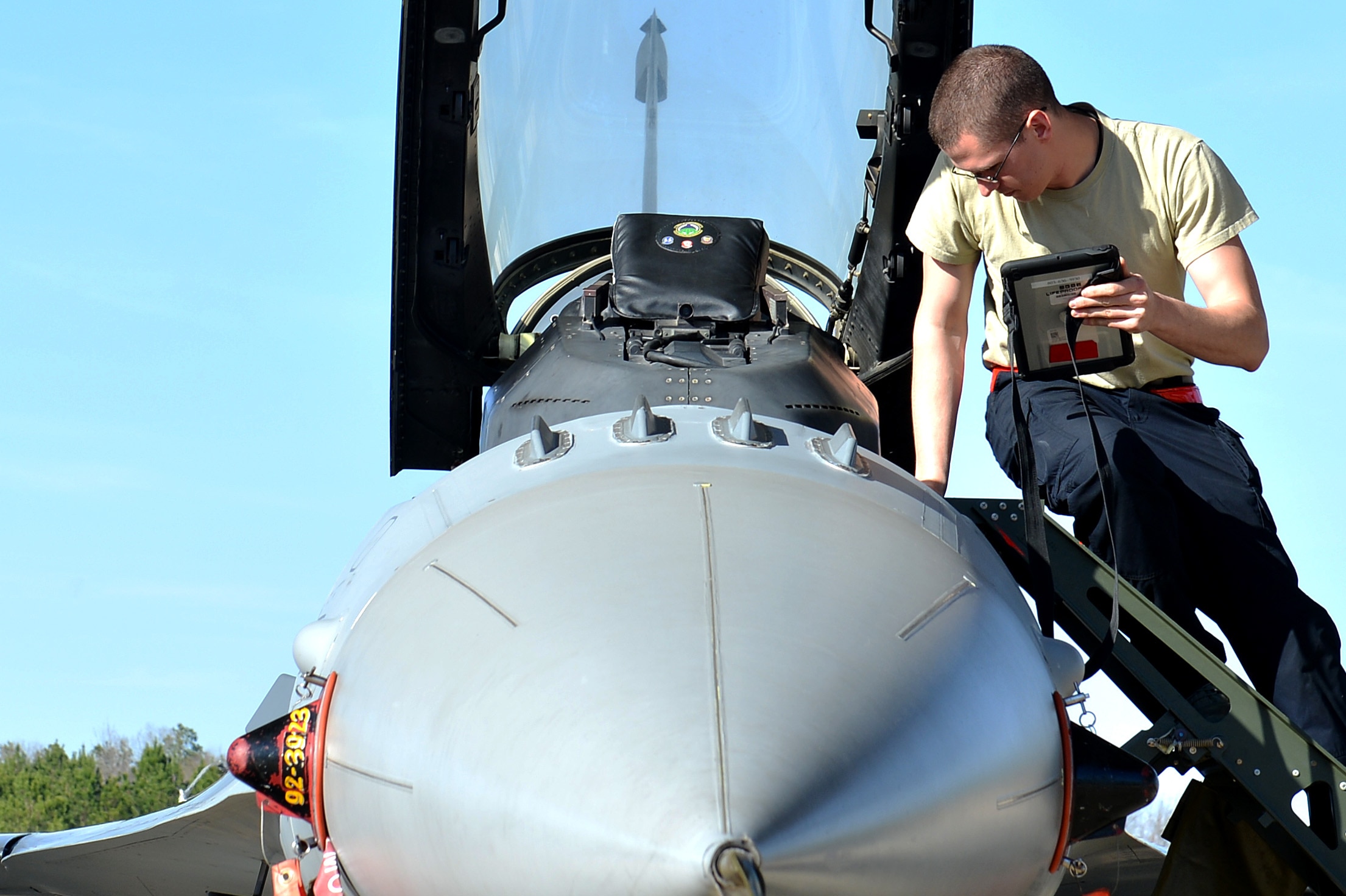 In the aircraft maintenance career fields, the Air Force cut at least 1,392 airmen through voluntary and involuntary drawdown programs rolled out in 2014, according to statistics the service provided to Air Force Times. Between 2013 and 2015, the maintainer shortfall jumped by nearly that much, or 1,217.

In addition, the Air Force loses roughly 6,000 maintainers a year to retirements and separations, and through 2014, it wasn’t bringing in enough new maintainers to fully replace them.

So in 2015 and 2016, the Air Force came up with a new plan, said Lt. Gen. John Cooper, the Air Force’s deputy chief of staff for logistics, engineering and force protection. The service started bringing on more new airmen into maintenance fields, redirecting some accessions that were originally earmarked for other career fields.

That "was the result of the Air Force saying, ‘We’re just going to give you more at the expense of somebody else,’" Cooper said. "We had to stop the bleeding."

The goal is to eliminate the shortfall entirely by the end of 2019, he said.

Problems in the shop

Lamb and two other Shaw maintainers told Air Force Times the drawdown was when problems started to emerge in their shop — especially in the ranks of maintainers with vital experience.

"We had 7-[skill] levels that had been in 10, 12 years that were getting cut, and 5-levels that had numerous things that had popped up on their record" that got them cut, Lamb said. "That’s when we started seeing the downfall. It happened at a slow pace, until we started noticing, we don’t have as much people as we used to."

Photo Credit: Devan Feeney/Staff
Lamb said most of those maintainers were kicked out because they failed fitness tests or had medical discharges. Others took advantage of voluntary separation programs such as early retirement, he said.

"Great people, great maintainers," with decades of experience walked out the door at Shaw in late 2014 and early 2015, Lamb said. Between 2013 and 2016, the 20th Maintenance Group at Shaw lost 130 authorized positions, with 113 of those losses in fiscal 2015, which began in October 2014. The 20th would not say how many maintenance personnel it has due to operational security concerns, but said there are 3,365 military personnel overall at the wing.

For those who remained, the effect was devastating.

"Our tempo of flying aircraft never slowed down," said Tech. Sgt. Jacob Jones, an F-16 crew chief with the 20th Equipment Maintenance Squadron. "So on top of that you get the stress levels that go up; you get not just the responsibilities, but the hours increase, the weekend duties increase."

The 20th is most acutely feeling the shortage in its ranks of 7-skill level maintainers, who often have a decade or more of experience.

But now, Coleman said, a 7-level fuel system craftsman would have to oversee the work on two, three or maybe even four planes to ensure everything was done right. Coleman, Jones and Lamb are all 7-levels.

"Most 7-levels, their minimum day is 12 hours," Jones said. "They’ll usually [work] two to three weekends, sometimes four weekends, every month, depending on the aircraft and how much they break. Because when you only have four or five 7-levels total, when we used to have 10, 15, somebody’s got to be there. Without a 7-level, the airplane doesn’t fly."

Lamb estimates that after he and other avionics airmen finish their primary jobs, they spend another three hours wrapping up additional duties each day.

Ramping up the stress

Coleman said that seeing fellow airmen get kicked out only ramped up the pressure on those remaining and had them fearing for their own careers.

"You would hear what people were getting relieved of duty for, whether it was a medical board, or they didn’t have the credentials academically, or things that were a necessity in our career field that showed career progression," Coleman said. "It makes you get on your game, go after the academics and pick up certain programs to make yourself more useful."

Cooper said there wasn't much the cash-strapped Air Force could do to avoid the maintainer cuts in 2014.

"When sequestration hit, we had an enormous bill that we had to pay," Cooper said. "We had to solve it in one year."

Cutting into readiness wasn't an option, Cooper said, since the Air Force was still operating in Afghanistan and was about to start bombing the Islamic State. The Air Force made some acquisition cuts, but he said it still wasn't enough to plug the budget gap.

So the Air Force was forced to slash personnel, he said. Aircraft maintenance is such a huge part of the Air Force's manpower — accounting for about one-quarter of the overall enlisted force — that there was no way to avoid cutting them, he said, though the service tried to lessen the blow.

Apart from the drawdown, other circumstances helped worsen the shortfall. The Air Force planned to retire the A-10, for example, and reassign its maintainers as it brought on new F-35s, but Congress stymied the effort to mothball the A-10 — which meant the Air Force now had to maintain both fleets. Each F-35 requires about 20 maintainers apiece, and the Air Force was bringing on two per month, Cooper said, which meant the service was further digging a hole to the tune of 40 maintainers a month.

The Air Force's overall maintainer shortage hit its nadir in fiscal 2015. That year, the Air Force had 63,179 maintainers, which amounted to a 6 percent shortfall, or 3,755 airmen, from the 66,934 it was authorized to have. That is close to the roughly 4,000 maintainer shortage Air Force Chief of Staff Gen. Dave Goldfein raised alarms about during his confirmation hearing last year.

At the end of fiscal 2016, the situation had improved slightly. Maintenance manning climbed to 63,807, and the shortfall dropped to 3,281, or 5 percent undermanned.

But a closer look at some of the most vital maintenance career fields shows that the shortfall persists — and is still alarming. Crew chiefs tasked with keeping legacy and fifth-generation fighters in the air have consistently flirted with 90 percent manning, the point at which personnel officials start getting worried.

Among fighter avionics airmen, the situation is even more dire. Manning for those airmen was at 92 percent in 2013, swiftly declined to 86 percent in 2015, before slightly rebounding to 87 percent last year.

The most experienced fighter avionics airmen, those with skill levels of 5 or 7, are in the worst shape, hitting 88 percent and 84 percent manning last year.

It's not just fighter squadrons feeling the pain.

"We're short everywhere," Cooper said. "We're most acute in the fighter maintenance area. Bombers are short as well. There's not a lot of 40-hour work weeks out there for fighters and bombers."

As the Air Force brings on more new airmen, it also must boost its ability to train and shape them into the next generation of maintainers at Sheppard Air Force Base in Texas. To grow that training pipeline from 6,500 to 7,000 this year, and then to 8,000 annually, Cooper said the schoolhouse is looking at ways to train more efficiently, add a second shift of classes, and add instructors.

The next challenge will be to get those newly graduated airmen from the 3-skill level to the more experienced — and in-demand — 5- and 7-levels, Cooper said. But there's no way to speed up that process, he said. It takes roughly 15 to 18 months, depending on the complexity of the air frame, to get a maintainer to the 5-level, and then another four to six years to get them to a 7-skill level.

"If it's a young crew chief, we can explain how to change a tire or a landing gear many times, but until they actually do it, they're not going to be experienced at it," Cooper said. "We're not talking about average work here. We're talking about airmen who have to do it right every single time."

'The clock is ticking'

The Air Force also is boosting its retention incentives and other programs to keep its seasoned maintainers. Cooper said that program is working, coaxing about 1,000 more airmen to stay on each year. He estimates the Air Force now has about 15 percent fewer experienced airmen — staff and tech sergeants, mostly at the 7-level — than it would like.

Some guardsmen and reservists, as well as contractors, are being called to bolster the ranks on the active-duty side.

The Shaw airmen said they are seeing more young maintainers come on board from technical school, but they agreed that there's no shortcut to rebuilding the ranks of 7-level maintainers.

"It takes 10 years to have 10 years of experience," Jones said. "That's going to be about where your 7-level group is."

But the clock is ticking for the Air Force to show progress. Those three Shaw maintainers say they aren't going anywhere. But they said they know a lot of people who have left or are seriously thinking of leaving to become contractors, where they can work shorter hours for twice their current salaries.

"They pride themselves on being that go-to person for their career field," Coleman said. "They signed up with the intent of fixing airplanes. And the added stress of being mentors, and all the added education, they look at that as [something that should be] a bonus, not something that is now mandatory. And if you don't do it, you're not qualified.

"That's the point where so many individuals in my career field said, this is not what I signed up for."

AFMC has some 90,000 civilian and uniformed employees. In most cases, uniformed Airmen will not be approved for regular and recurring telework.

The move builds on months of efforts to publicize health care and disability payouts available through the PACT Act.

US sending $275 million in military aid to Ukraine

Including the latest aid, the U.S. has now committed more than $19.3 billion in weapons and other equipment to Ukraine since Russia attacked on Feb. 24.

About 2,000 independent pharmacies coming back to Tricare

Other pharmacies still have time to rejoin Tricare network, but reimbursement rates are lower in the coming year.