By Michael Casey, The Associated Press
In this March 1, 2017 photo, Michelle Dalton, Andrea Amico and Alayna Davis, all mothers with children at a daycare center at Pease International Tradeport in Portsmouth, N.H., pose together at the tradeport. Several hundred children who drank contaminated water at day care centers located on the former Air Force Base have been found to have elevated levels of chemicals in their blood. Given so little is known about the health impacts of the chemical, PFOA, the parents are struggling for answers and wondering what might happen to their children. (AP Photo/Elise Amendola)

PORTSMOUTH, N.H. — The Pease International Tradeport, which features an airport, hundreds of businesses and several day care centers, has been called a textbook example of how to redevelop an air base.

But many who worked or had their children looked after there are coming to terms with a hidden risk: drinking water contaminated by military firefighting foam that contained perfluorinated compounds, or PFCs.

Exposure to the chemicals, found in scores of everyday products like nonstick cookware and stain-resistant carpet and probably occurring at low levels in most people, have been linked in animal studies to low birth weight, accelerated puberty, cancer and thyroid problems, among other maladies, according to the Environmental Protection Agency.

But it's far from clear how much those problems also manifest in humans. And the uncertainty isn't sitting well with the Pease parents whose children were found to have elevated levels of PFCs in their blood. Many, like Andrea Amico, Alayna Davis and Michelle Dalton, who formed the advocacy group Testing for Pease in 2015, said they have struggled to find doctors who can interpret the test results. 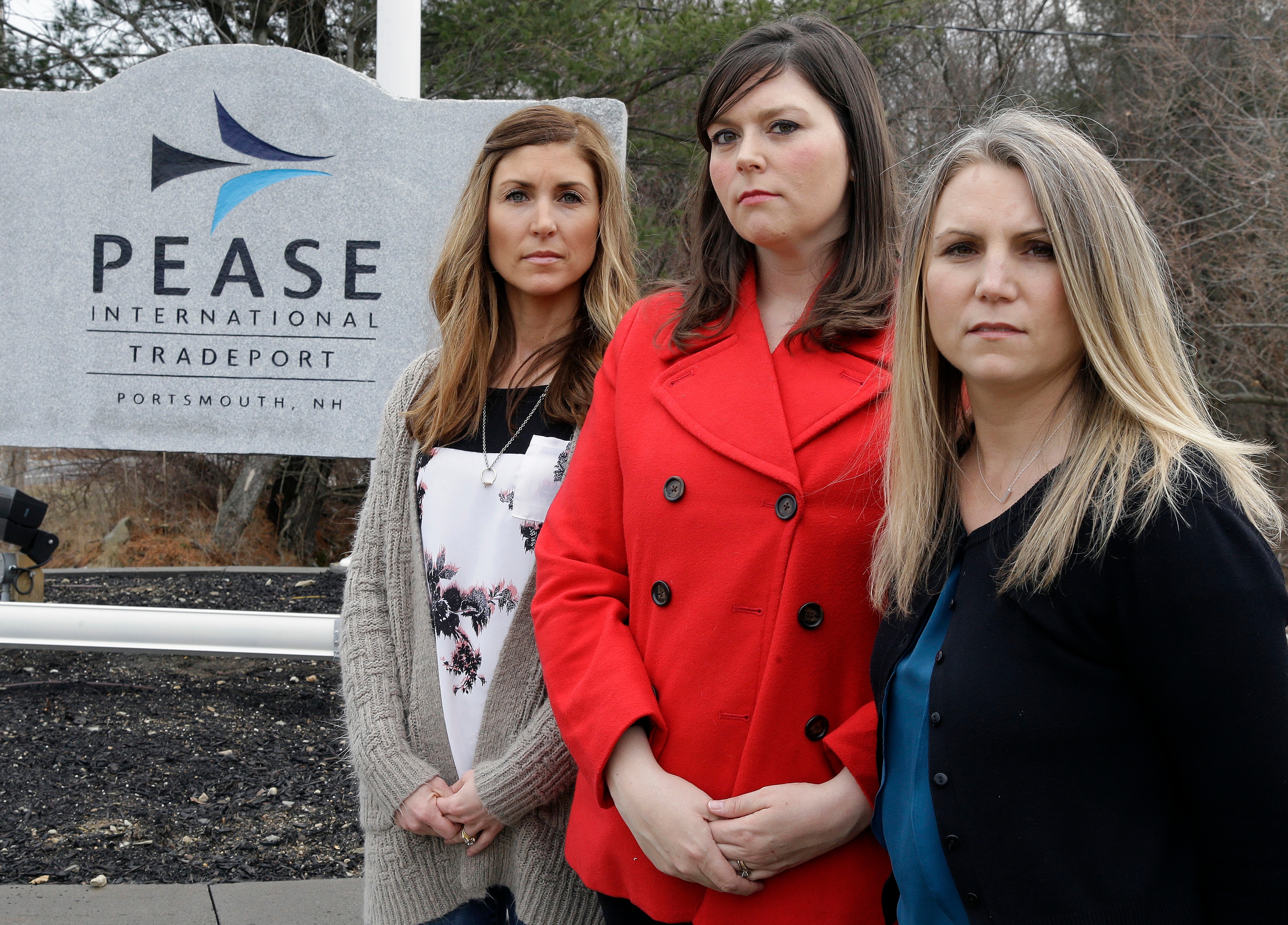 In this March 1, 2017 photo, Michelle Dalton, Andrea Amico and Alayna Davis, all mothers with children at a daycare center at Pease International Tradeport in Portsmouth, N.H., pose together at the tradeport. Several hundred children who drank contaminated water at day care centers located on the former Air Force Base have been found to have elevated levels of chemicals in their blood.
Photo Credit: Elise Amendola/AP
None of the three women can definitely say the exposure has been linked to health problems. Still, they wonder whether their children's frequent fevers and infection might suggest the chemicals are affecting their immune systems.

"My son looks like a normal 4-year-old boy. He's active. He loves everything that 4-year-old-boys love," Dalton said. "But on the inside, it's a different story. His body is constantly fighting."

More worrisome, they said, is what the future holds for their children, since the chemicals can remain in the body for years.

"My concern is that their long-term health will be impacted by this significant exposure that they had as small children," said Amico, whose two children attend a Pease day care and have elevated PFC levels. "I'll never stop worrying about their health."

Prompted by an EPA advisory issued last year, the Air Force has investigated 190 bases for foam contamination and is treating groundwater or bringing in water at 20 bases, including Pease — a number that could grow. It is also changing the type of foam it uses.

Since 2015, New Hampshire health officials have tested the blood of more than 1,500 people — including 366 children — who worked on or lived near Pease or attended day care there. Those tested had significantly higher levels of three PFCs — PFOA, PFOS and PFHxS — than people who took part in a 2012 survey by the Centers for Disease Control and Prevention. It also found that children's levels of some PFCs were twice as high as those in a 2012 study in Texas that examined 300 children; Dalton's son had levels four times higher.

New Hampshire has been trying to address the contamination without causing undue alarm, a challenge given that so little is known, said Dr. Benjamin Chan, the state epidemiologist.

"Just because someone has these chemicals identified in their blood, it doesn't mean the chemicals are connected with past, present or future health problems," he said. "We have heard from communities about individuals wanting to know long term what the exposure means for their health. Unfortunately, the science is not at a place where we can easily answer that."

Philippe Grandjean, an adjunct environmental health professor at Harvard University, said there reasons to be concerned. In a 2012 study in the Journal of the American Medical Association he conducted with several Danish researchers, Grandjean found a connection between PFC exposure in children and lower immune response to vaccines. And several studies from the C8 Science Panel found links between exposure to PFOA and several types of cancers.

"As we have begun to look into the adverse effects, we have found more and more," said Grandjean, whose study examined more than 500 children from the Faroe Islands.

At Pease, a well — found to have PFOS levels of 2,500 parts per trillion, or more than 30 times the current EPA advisory of 70 parts per trillion — has been shut down. Portsmouth last year installed a system that filters and removes PFCs from the two other wells, while the Air Force is designing a groundwater treatment system for Pease that could be operational as soon as November.

Amico and other Pease families want federal authorities to fund a long-term health study of those exposed, as well as a medical monitoring program.

Build alliances, and, for the love of god, don't turn on CNN.

This year the cadets fumbled their mission. Hard.

Prepping for a maritime fight

The Air Force is preparing for a new era in maritime operations, taking on a larger role in surface warfare as the U.S. casts a wary eye at China and Russia.

On Oct. 15, Williams, 32, opened a storefront in a converted old home and the Nut House Pecan Company was born.

After pandemic deaths doubled over late summer and fall, the military hasn't had any in two weeks.

Rosemary Ogbenna, 45, was charged this month by the District Court for the District of Columbia for allegedly carrying out a plot to steal more than $400,000 in benefits from elderly, mentally ill and disabled veterans she housed through her room and board business.

It's not clear whether the protest will alter the timeline for service members to begin using the new moving process, which is now expected in late 2022.

Tanks on the move: historical armor sets up in Ft. Benning | Miltech

Money Minute - What is zero-based budgeting and how can I set it up?

Prepping for a maritime fight