Despite complaints, ACC will not remove posters that assert faith's importance

By Kent Miller
A poster on display at Air Combat Command headquarters, Joint Base Langley-Eustis, includes words about the importance of faith that were included in a 1955 Air Force Manual.

A pair of posters that focus on the importance of faith, which have been on display at Air Combat Command headquarters at Joint Base Langley-Eustis, Virginia, for years, will not be altered — despite recent complaints about them — according to command officials.

The Military Religious Freedom Foundation had contacted the base about removing the posters after complaints from the Langley community. In addition to objections to the faith-based message of the posters, which quotes a 1955 Air Force Manual, the foundation's president and founder, Mikey Weinstein, also complained that the posters only referenced male and not female airmen.

Weinstein said MRFF filed the complaint of behalf of 16 Air Force officers, NCOs and civilians. The complainants included nine women, according to Weinstein. He said four are Christians and the others are Jewish, Muslim, atheist, agnostic, humanist or secularist.

One of the complainants said the posters "clearly advocate a higher value in religious airmen over non-religious airmen, and communicate a necessity for religious faith to be successful as airmen. Both photos quote from AF Manual 50-21, dated August 1955 — the heart of the Red Scare when being non-religious was viewed as a trait of Communism and hence a threat."

In addition, the complainant said, "one of the quotes on these photos hearkens back to the days of male dominance in the Air Force, and is not appropriate."

The posters in question show the Statue of Liberty and the lights that went up after 9-11 at the site of the World Trade Center in New York.

The text below one of the photos reads, in part: "Men cannot live without faith, except for brief moments of anarchy or despair. Faith leads to convictions — and convictions lead to actions. It is only a man of deep convictions, a man of deep faith, who will make the sacrifices necessary to save his manhood." 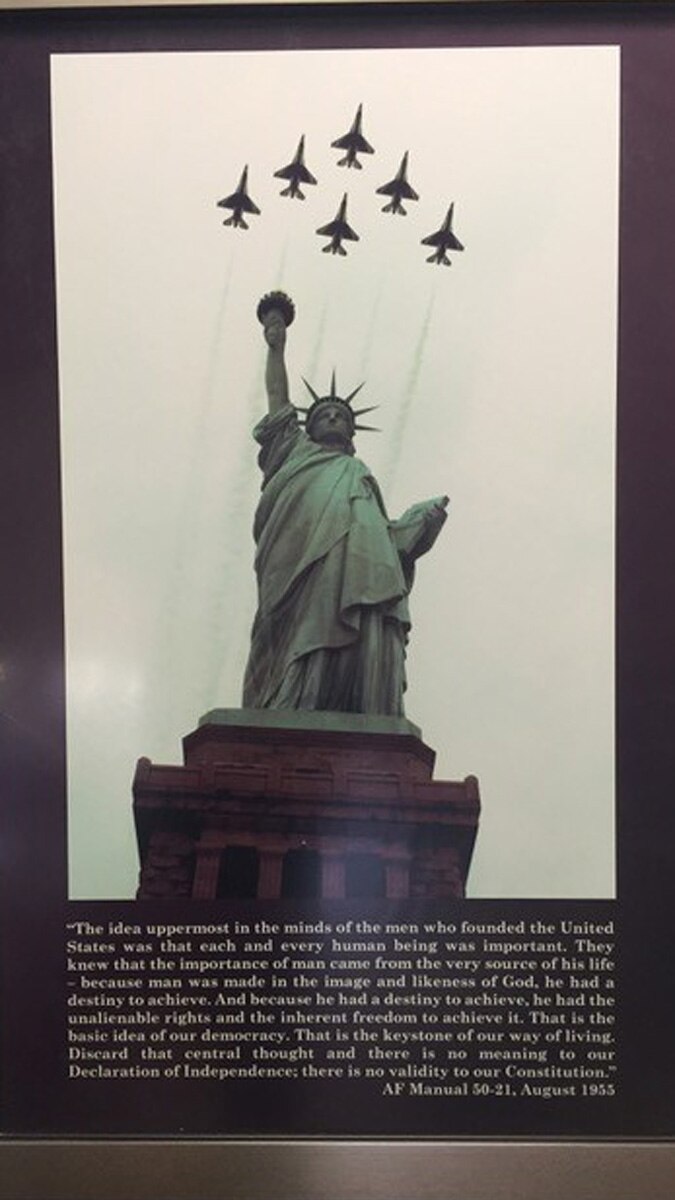 A poster on display at Air Combat Command headquarters, Joint Base Langley-Eustis, includes words about the importance of faith that were included in a 1955 Air Force Manual.
Photo Credit: Courtesy of Military Religious Freedom Foundation
Command officials say the posters are appropriate.

"Air Combat Command officials have reviewed one complaint about a display of posters in one of our buildings and decided to leave the display unaltered," said Col. Edward Sholtis, an ACC spokesman. "The posters do not officially endorse, disapprove of, or extend preferential treatment for any faith, belief or absence of belief, which is the standard established by regulation that would warrant action."

Sholtis added that the posters are "historical, two in a series of seven" that quote various sections of a 1955 Air Force Manual.

"Although we do not have a record of when the posters were first displayed, they have been there at least six years and perhaps up to 20 years," he said. "The literal meaning of the two quotes identified in the complaint — the importance of personal faith in a broad sense and the importance of an individual's rights and freedoms — are appropriate and consistent with established traditions of using historical documents to promote reflection and inspiration."

A poster on display at Air Combat Command headquarters, Joint Base Langley-Eustis, includes words about the importance of faith that were included in a 1955 Air Force Manual.

"ACC senior leadership is compromising the integrity of its solemn oath to support and defend the Constitution, which includes the No Establishment Clause of the First Amendment and the No Religious Test prohibition of Clause 3, Article VI of the Constitution," he said. "The male supremacy triumphalism violates the Equal Protection guarantees of both the 5th and 14th amendments."

The services are having trouble compiling complete data on extremism reports.

An F-16 pilot died when his ejection seat failed. Was it counterfeit?

‘Deterrence the American way’: The new B-21 bomber debuts