U.S. space capabilities in 2030 need to look very different than they do in 2016 if the military wants to keep its edge in Earth orbit, a top Air Force space official said.

"Our current enterprise is not resilient enough to survive a war that would extend into space," said Maj. Gen. (sel.) Stephen Whiting, the director of integrated air, space, cyber and ISR operations at Air Force Space Command.

Speaking at a recent breakfast hosted by the Mitchell Institute for Aerospace Studies, Whiting said one of the biggest challenges is that the space assets the U.S. has now are very vulnerable to attack.

"Most of our current space systems were designed when space was considered a benign environment," he said. "Little thought was given to system protection or defense." 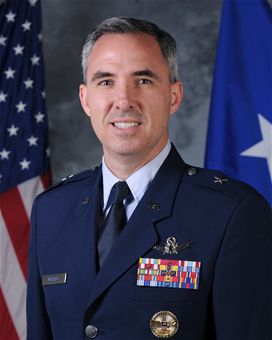 Maj. Gen. (sel.) Stephen Whiting, top Air Force Space Command officer, said the U.S. military needs more resiliency for satellites and ground systems if it expects to keep its edge in orbit.
Photo Credit: Air Force
In order to keep down cost and weight, several military capabilities were often grouped together and launched on the same satellite. That’s created some satellites that might have communications, navigation and timing, or missile warning and surveillance systems, all onboard the same craft.

"Today’s large and relatively unprotected systems offer a tempting target for any potential adversary seeking to level the playing field by denying us the warfighting advantage our space systems deliver," Whiting said. "Other countries understand the competitive advantage we derive from space. They view our reliance on space as a key vulnerability, and they’re working hard to exploit it through kinetic, non-kinetic, and cyber tools designed to deny, degrade, and destroy our space capabilities."

The Air Force is launching the Space Enterprise Vision, or SEV, a roadmap to 2030 that will include bolstering space resiliency.

One of those key steps, Whiting said, will be disaggregating satellites so there aren’t so many critical systems on a single unit. Another option would be hardening satellites against an attack.

The Air Force also wants to move to a "faster and more predictable" launch schedule that will include launches scheduled at regular intervals, rather than the current model of tying rocket launches to specific payloads.

Whiting described it as a "freight train to space" model, likening it to ground transportation that is always ready to move cargo when needed. He said he expects the launches would make use of both military and private-sector launch capabilities.

"The idea is that there are regular launches that we can predict, and we know exactly what orbital altitude they’re going to, and we can quickly mate a payload to them that needs to go," he said.

But one thing the service is going to have to do first is to standardize the interfaces and operating systems of both satellites and ground control. Previously, each satellite was built in a vacuum, with software and controls often specialized for just that unit, and each with a specific ground-based infrastructure.

The service is now looking at creating common operating systems – or at least compatible systems – that will allow easy communication and transfer between different satellites.

"One of the key things we’re going to need is to standardize the interface between our payloads and our boosters," Whiting said. "We want to reduce the preparation time to get the rocket out to the pad and then launch it."

Fire breaks out on Navy ship

A blaze broke out on the amphibious assault ship Bonhomme Richard on Sunday, injuring dozens with smoke inhalation and continuing well into Monday. The ship was in harbor for repair and upgrades at Naval Station San Diego.
Close
Now Playing