It's the Raider: Air Force unveils name of new B-21 bomber

The Air Force’s next stealth bomber will be called the Raider.

The aircraft’s name, announced Monday at the Air Force Association’s Air Space Cyber conference in National Harbor, Maryland, hearkens back to one of the service’s most storied moments: the 1942 Doolittle Raid on Tokyo in World War II, the first raid on the Japanese homeland..

And to underscore the connection, one of the Doolittle Raiders – 101-year-old retired Lt. Col. Richard Cole, who was then-Lt. Col. James Doolittle’s copilot on aircraft 1 during the raid – took the stage to make the announcement, alongside Air Force Secretary Deborah Lee James. 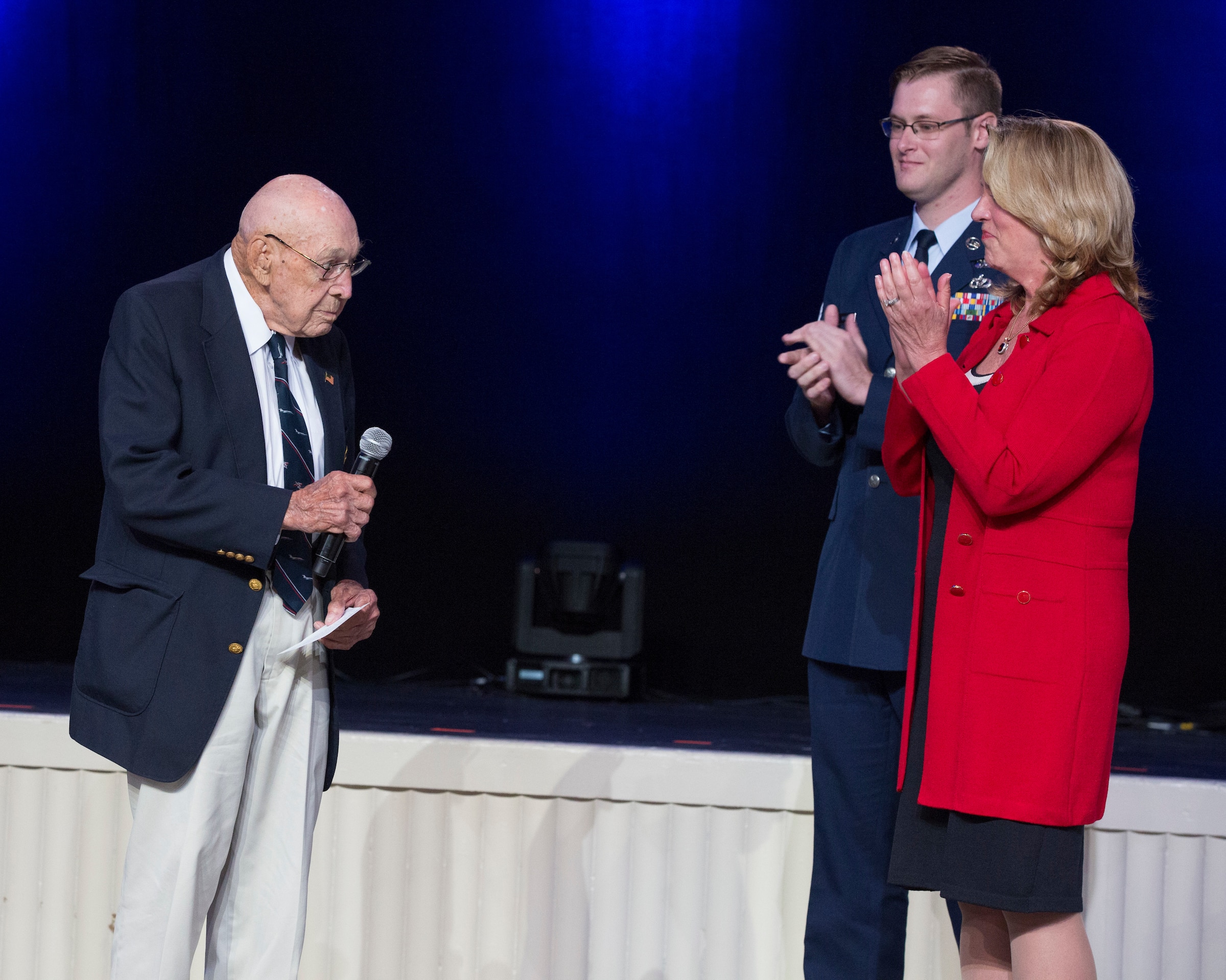 Retired Col. Richard E. Cole, a surviving member of Doolittle's Raid on Japan, announced the name of the new long range bomber---the "B-21 Raider", as Air Force Sec. Deborah Lee James, right and Technical Sgt. Derek White, center, who came up with the Raider name along with Lt. Col Jamie Hernandez (not pictured), look on.
Photo Credit: Alan Lessig/Staff
"I am very humbled to be here representing Gen. Doolittle and the Raiders at the naming of the B-21 Raider, and wish they were here," Cole said. "We are deeply honored."

In her introduction, James called Cole "a cut above" and "one of the greatest men of the Greatest Generation."

"He signed up for a one-way trip to Tokyo back in April of 1942 with Jimmy Doolittle," James said. "Our Greatest Generation, the generation of World War II, secured our freedom for all of us, and we’ve been able to live our lives as a result."

The Air Force earlier this year held a contest to have airmen submit suggestions to name the B-21. James saluted Lt. Col. Jaime Hernandez, commander of the 337th Test and Evaluation Squadron at Dyess Air Force Base in Texas, and Technical Sgt. Derek White, an emergency management craftsman at the 175th Civil Engineering Squadron with the Maryland Air National Guard, for submitting the winning name.
About Stephen Losey

A group of aviation enthusiasts was scanning radio frequencies for the exchanges between the pilots as an F-22 fired a missile and downed the balloon.

Space Force vows ‘above and beyond’ cleanup of Maui spill

The U.S. government is working to provide aid to earthquake victims in the Middle East.

How to grow a cheesy Navy sailor mustache

Mustache March is around the corner.

Security forces arrested the intruder and an investigation is underway.

VA takes to the streets to count homeless veterans

Space Force vows ‘above and beyond’ cleanup of Maui spill